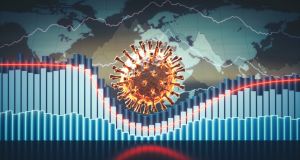 With increased levels of borrowing required to support the fiscal impact and response to Covid-19, gross general government debt exceeded the peak of €218bn in the third quarter of 2013

The Government generated a budget deficit – the difference between what it spends and what it takes in in taxes – of €6.2 billion in the second quarter of 2020, the largest on record.

The figure, contained in the half-year Government Finance Statistics, arose as a result of the increased expenditure on pandemic-related supports and a fall off in tax receipts during the lockdown.

On the expenditure side the increases were mainly due to the Government primary wage support scheme and the Pandemic Unemployment Payment (PUP), which came to just over €4 billion combined for the three-month period.

In terms of revenue, taxes were also down significantly, predominantly due to lower levels of VAT. The Central Statistics Office (CSO), which collates the data, said indirect taxes were down 23.5 per cent, while direct taxes (including corporation tax and income tax) were up 8.7 per cent.

The resilience of income tax has been one of the eye-catching features of the public finances.

With increased levels of borrowing required to support the fiscal impact and response to Covid-19, gross general government debt exceeded the peak of €218 billion in the third quarter of 2013, the CSO said.

At the end of 2019 the debt to GDP ratio of 57.4 per cent was below the EU’s Stability and Growth Pact limit of 60 per cent. Since then the level of debt has increased by €22 billion, with the ratio at 62.7 per cent of GDP at the end of the second quarter.