Multinationals were disappointed that the change was not signalled in advance 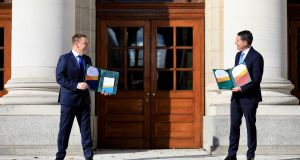 It may seem that the world almost came to a stop in 2020, but the pace of change in the international tax landscape certainly has not. Change seems to be coming from all sides – the OECD process, the EU, Brexit, US elections, a change of government at home and of course, Covid-19, which was the change no one asked for.

The international tax landscape definitely continues to be in a state of flux and Ireland needs to be at the table of global tax reform.

But it’s difficult to see where Ireland sits in the midst of this – are we a player or a spectator?

Ireland has attracted strong levels of foreign direct investment (FDI) over the past 30 years and the multinational community has contributed greatly to our economic success.

More recently, it’s been clear that our multinational sector has helped mitigate some damage inflicted on our economy due to Covid-19 – and is certainly driving regional development, with half of the investments in the year to date having been outside of Dublin, according to government statistics.

Along with our near iconic 12.5 per cent tax rate, a key part of continuing to attract this international investment has been the stability and transparency of our corporate tax regime. Signalling measures in advance helps to map the national economic brand we as a country want to create and future sectors we want to attract.

Where we have a lead is how we provide that stability and guidance through our Corporate Tax Roadmap – another one is due out soon.

It was a disappointment to the FDI community that the change to the intellectual property depreciation regime for newly-acquired intangible assets, which was announced in the budget last Tuesday, was not signalled in advance. The manner in which the change was announced with immediate effect on budget night was out of line with the Government’s long-standing policy of “no surprises” consultation.

Surprises such as this may erode our competitiveness at a critical time in the global tax flux that we find ourselves in, especially to a sector that is bringing so much to the economy through tax receipts and employment.

Impact of the US elections

Where Ireland will be a bystander will be the outcome of the US presidential election next month, and its impact on global trade relations. A Joe Biden presidency may offer more hope of reaching a global agreement on tax reform.

However, a question in the US is whether he would change any of the business-friendly domestic measures introduced by Donald Trump, which could have a knock-on effect here.

In a recent PwC survey of US business leaders, many executives expressed more concern about tax policy change under a Biden administration than under a second Trump administration. However, most agreed that business tax rates are likely to rise under either administration as a result of the impact of the economic costs of Covid-19 on current deficit levels.

To the extent that there are changes, we will need to watch closely who controls Capitol Hill as well as the Oval Office, and take some solace that US tax change isn’t a fast-moving play in this larger chess game.

Ireland and the next round of the OECD process

Arguably, where both the Government and the businesses that call the Republic home need to be most proactive is the next chapter of the OECD’s proposals to change the global rules around how the profits of multinationals are taxed.

The proposals offer a two-pillar solution with pillar one seeking to give market jurisdictions increased taxing rights (and therefore increased income) and pillar two, probably more concerning, looking to put a floor or minimum tax rates across the globe.

The OECD estimates that globally companies will pay more tax overall, and where this tax falls is up for discussion and negotiation. While the new proposals will certainly have an impact, it’s not certain that our corporation tax receipts will fall off a cliff. Even if the rules have no impact on a company’s tax bill, they could still impose a huge burden from an administrative perspective.

It is important that the political process does not get ahead of the technical work – and this is where Ireland, both government and corporate, needs to play a key role.

The focus for stakeholders over the next two months should be on consulting with the OECD on the proposals. If the OECD process fails, we could see the EU act “en bloc” which could result in more complexity for businesses which wouldn’t help with our competitiveness.

Accordingly, it is critical for concerned stakeholders to use this opportunity to try to shape the outcome so that the rules do not impact global trade and can work for business.

We know that difficult decisions must be made, and made with additional pressures we would not have foreseen 12 months ago. Although it may seem that much is out of our control, we must continue to actively participate in the discussions. The game may be in the final quarter but the ball is in our hands.

So while the next chapter of global tax reform is still to be mapped out, Ireland needs to be a player. In these uncertain times and with so much to play for, we can’t afford not to be.

Susan Kilty is head of tax at PwC