Dublin-registered firm responsible for operations outside North America and Mexico 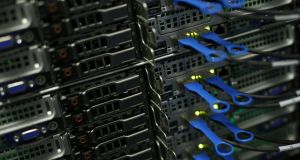 A Dublin-registered holding company for all Dell and EMC operations outside North America and Mexico last year recorded pretax profits of $186.4 million (€169.29 million)

New accounts filed by EMC International Company show the company recorded the pretax profits after revenues increased by 41 per cent to $1.1 billion in the 12 months to the end of February 1st last.

The directors state the value of EMC Ireland Holdings at the date of disposal was $1.94 billion.

The company paid out dividends during the year of $51.25 million and this followed a dividend payout of $622.72 million in fiscal 2018.

In 2016, Dell closed a $67 billion deal to purchase EMC which is the largest-ever acquisition in the technology sector.

The directors for EMC International Company state they are satisfied with the result for the year and they believe the company has specialised technologies and services to grow the business.

The company recorded its profits after taking into account research and development expenses of $709 million and non-cash amortisation of intangible assets of $180.49 million.

EMC International Company acts as the principal holding company for predominantly all Dell and EMC operations outside the US, Canada and Mexico.

The company is also the owner of certain intellectual rights which it develops and licences to other EMC group companies.

EMC International Company is a private unlimited company incorporated in Ireland and has its registered office in Dublin. The administrative office for the company is located in Bermuda.

In a post-balance sheet event, the directors state that on April 5th last, the company sold its intellectual property to EMC Information Systems International for $7.5 billion.