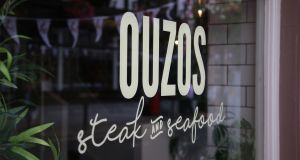 Ouzos in Dalkey. Photograph: Nick Bradshaw for The Irish Times

The 598 jobs saved represents a 20 per cent increase on the previous year as viable businesses availed of the process whereby court protection is obtained to assist the survival of a company.

Baker Tilly, in its examinership index, estimated that the savings to the State were in excess of €2.6 million as a result of averted claims for wage arrears, holiday pay, minimum notice and statutory redundancy payments.

The PBR examinership, which wrapped up in early December, saw suppliers lose more than 80 per cent of the €700,000 due to them. As part of the plan, Esprit Investments, owned by Swiss-based Irish millionaire Eric Kinsella, bought the high-profile Ouzos Restaurant in Dalkey, Dublin, with chef and existing shareholder Raouf Djeffal. Other backers bailed out Fishshack. AIB will get 17.5 per cent of a “six-figure” sum due to it from PBR, which was secured against company assets.

Since Baker Tilly started gathering statistics, it estimates that about 16,000 jobs have been saved through examinership, resulting in savings to the State in excess of €134.6 million in redundancy payments alone.

The company’s managing partner, Neil Hughes, said that the growing number of companies availing of examinership is to be welcomed given the uncertainty surrounding Brexit.

“This is likely to disproportionately impact firms in the haulage and logistics sector who are heavily dependent on transporting good both into and through the UK market. The possible introduction of customs procedures, rules of origin requirements and other barriers to trade will create new costs for importing and exporting firms, many of whom operate on thin margins,” he added.