Pitfalls and perils as Ireland does business with Trump’s US 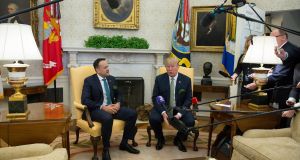 President Donald Trump and Taoiseach Leo Varadkar: many children and grandchildren of Irish emigrants tend to row in behind the Republican Party. Photograph: Chris Kleponis

When Ireland’s national day approaches, the business community tends not to look inwards, but instead prefers to look west to the US, usually forming a tag-team with the State’s political machinery.

Business leaders based on both sides of the Atlantic have quite literally dined for Ireland this week. A bellyaching blizzard of breakfasts, lunches and dinners were arranged across New York, Washington and other US cities by Enterprise Ireland, IDA Ireland, Ibec, the Ireland Funds, the Ireland-US Council and many more.

As Ireland gets back to within touching distance of full employment, the economic narrative of much of the last decade – let’s help the old sod recover from disaster – must change. So what will the Irish and US business communities, linked through a sprawling Irish-American diaspora and a shared love of pigging out on sumptuous banquets, have to say to each other now?

And how will that communication fare in the diplomacy-free age of President Donald Trump, who is, perhaps unkindly, often associated more with orange than green?

As the economy returns to full tilt, it is worth recalling amid the back-slapping and mutual recognition that the last time Ireland’s ledgers were in such good shape, during the frothiest Tiger years directly before the crash, a slight disconnect had begun to develop between the Irish diaspora in the US and those living on the misty motherland.

They didn’t discuss it much from the podiums at their lunches and dinners, but some Irish Americans, including many in the business community, were starting to crib about the attitude to the US from some in Ireland.

As the ramifications of then president George Bush’s military adventures affected the US’s reputation globally, I recall talking to one very high-profile Irish-American executive who complained loudly to me of anti-Americanism and anti-Bushism among his indigenous Irish brethren. He seemed genuinely wounded by it.

These are the feelings that can emerge when axes get buried in the nose cones of US planes on Irish soil.

Native-born Irish tend to look most favourably upon the Democrat Party in the US, as it is closer to the political compass of Europe. But many children and grandchildren of Irish emigrants tend to row in behind the Republican Party. We often forget that here.

With Trump’s election sparking a form of hyper-nationalism among Republican grassroots, many of them Irish-Americans, this issue has become relevant once again.

Back in the pre-crash mid-noughties, US multinationals were also complaining loudly about the lack of competitiveness that had crept into the Irish economy. Even before the crash, some had pulled in their investment horns. There was a developing sense among some in the US business community that the Irish economy, newly loaded, was in danger of losing the run of itself. And weren’t they right, with bells on?

A decade later, and with the party back on, is there a danger that some of these sentiments could emerge once again?

Taoiseach Leo Varadkar must walk a tightrope swaying in a gale above a pond full of alligators as he tries to maintain cordial relations with the US in the fickle age of Trump. The US president claims no Irish ancestry and has no reason to kiss our Irish ass, in terms beloved of some Irish Americans. He may well look upon the traditional bowl of shamrock as a container of germs.

Taoisigh maintain cordial relations with US presidents in part to help transatlantic business relations. What will happens to those relations when Varadkar, as seems likely, is forced to criticise Trump for political reasons? Enda Kenny could get away with some clever backhanded criticism of Trump on immigration last year, mainly because he had built up such capital in Washington. They love him there.

How will Trump’s crowd react to renewed criticism – whether it be on the trade wars or any other matter – from Varadkar, a gay, cosmopolitan young man of Indian heritage? At one of the Irish-US banquets this week, the Taoiseach suggested that the American dream could “falter”. Trumpeteers won’t like hearing that one, no matter where their grandparents emigrated from.

The irony is that Varadkar, in a way, personifies a part of the new, modern image of a confident Ireland that the State will try to sell to foreign investors in coming years, in an era (hopefully, if Trump can avoid mayhem) of lasting economic prosperity.

The business community will row in behind whatever Brand Ireland message the State projects. Hopefully, the Irish business community also remains alive to the risks of any new disconnect emerging that could affect relations with their US counterparts.

With Trump at the US tiller, and Ireland’s economy evolving, those risks are real.

Developer Johnny Ronan doesn’t like losing. So he will have been mightily miffed by the verdict this week in a legal case between Chambury, which he appears to have influence over and where his daughter Jodie is director, and Balark, part of the Marlet group. The case was over a “ransom strip” allegedly holding up a €100 million docklands development.

Ronan fell out with Marlet’s Pat Crean over a valuation for a small parcel of the site, where Balark has planning permission but Chambury owns the freehold, albeit leased to the Marlet entity on a peppercorn rent for 250 years.

Ronan originally wanted €20 million for the 30ft-wide strip fronting on to Sir John Rogerson’s Quay. Marlet, the High Court decided on Tuesday, only has to pay €45,000 to buy it out under ground rent rules. That would barely pay for a parking space in the area.

Ronan’s mood will not have improved after a costs ruling on Thursday, which specified that Chambury must pay its rival’s costs for the freehold case and also two associated declarations sought by Balark.

The Marlet company also got an order setting the €45,000 it must pay Chambury for buying out the freehold against its legal costs.

Is Ronan likely to take all of this lying down? That tends not to be his style.

The Government has caved in to pressure from the hospitality industry and has agreed to allow Irish restaurants and hotels to go outside the European Union to hire chefs, to address a chronic industry shortage.

Only chefs above chef de partie (mid-ranking) level will be allowed to be recruited from outside the EU, and even then, the cap will be two per establishment.

But at least it is some recognition of the hardship facing the industry. Now, let’s see what else food businesses have cooking in terms of improving difficult working conditions.