Six of Ireland's leading chefs speak out about their work, the stresses of the profession and bullying in the kitchen. Video: Bryan O'Brien 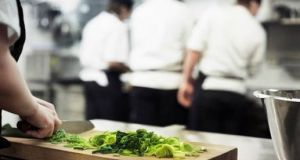 “Out of the 60-something students that were in my year, only about 20 are still chefs currently. This is because of work conditions, and the quality of life as a chef is just terrible.” Photograph: Getty Images

This week we reported that Irish restaurants are hiring chefs directly from Italy, Croatia and France to address a shortage of 8,000 across the hospitality industry, which is booming once again as the domestic economy straightens its back.

The Restaurants Association of Ireland (RAI) says the acute chef shortage is growing by more than 3,000 annually due to a shortfall of training places. It wants the State to relax work permit restrictions on chefs from outside the EU.

The message from the industry is clear: If you’re not Irish but you can cook, come into the parlour. There’s a welcome here for you. It doesn’t matter if you’re not a Timothy or a Pat. If you’re willing to cook in Ireland, there’ll be a welcome on the mat.

The RAI argues, correctly, that the chef shortage is curtailing expansion within the hospitality industry, which is vastly under appreciated by policymakers as a massive source of employment for people of varying skill levels. It also disperses jobs around parts of the State that other industries simply cannot reach with any scale.

It is true that the number of training places for chefs has remained constant since the recession, even while tourism has exploded to record levels and domestic consumers have rediscovered their vim. It must surely be a contributing factor to the shortage.

But is it the only factor? What about the perception that chefs often do long hours for modest pay, and, more disturbingly, that there is a clear bullying culture amongst chefs? Turn on the television and you can watch some celebrity chefs, such as Gordon Ramsay, eviscerate kitchen staff for entertainment. This is a bullying culture in action.

It is almost 15 years since I worked full-time in the industry, but that culture was alive and well then. It was most apparent in the upper, or fine dining, end of the market. I also clearly recall that busy, testosterone-charged kitchens were an especially difficult environment for female chefs. Chef turnover was high and burnout was rampant.

The RAI said this week that working conditions in the industry have improved since then. And, as the industry has become more sophisticated, things have surely changed somewhat. But have they changed enough?

The day after our story about the shortage of chefs, I received a letter from a man who had once worked in construction, but retrained as a chef at the age of 28 following the last property crash. He went back to college to study culinary arts at DIT Cathal Brugha Street, where I studied hospitality management.

“The experience as a whole was great. I graduated, and went out into the industry excited about my new career,” he says.

“But what I have [experienced] since I can only describe as an utter disappointment. I don’t have any official figures or studies to cite in support of what I say. I just have my own experience and that of my friends in the industry.”

He argues that there may be 8,000 vacancies for chefs in the industry but there is not a shortage of 8,000 qualified chefs in Ireland.

“Out of the 60-something students that were in my year, only about 20 are still chefs currently. This is because of work conditions, and the quality of life as a chef is just terrible. The unsociable hours, split shifts, the stress and the pressure – the physical toll it takes on your body. None of this is compensated for by fair pay.”

He argued that our coverage of the shortage complained of by RAI did not ask “why no one wants these jobs or why staff turnover is so high, or why poor health and drug addiction is the norm in our industry”.

He continues: “Our whole industry is built on the ‘just do it, chef, or I’ll find someone who will’ mentality. But that is finally starting to catch up with the industry, and now they think the answer is to just recruit from other countries so they can bring people here to be treated in the same manner. The answer is not to ship the misery onto the next guy, but to reform the industry.”

The RAI says it is planning to launch an advertising campaign to attract more chefs and other staff into the industry, which will come under even more strain as State authorities further pump-prime the tourism market in coming years.

“I maybe sound a bit bitter because I probably am,” says our chef. “I am currently looking for a new career to get away from the industry, which is such a shame because I loved all the positives of the life. I just wanted to cook good healthy food, but the broken industry just makes it impossible for me.

“If we are really going to encourage the youth of today to get into this industry, we as adults should at least be honest about what it ‘really’ is.”

Perhaps this man’s experience has been particularly egregious and unrepresentative. But if, as he says, two-thirds of his chef classmates have already quit the sector, then the hospitality industry has a problem within.

No amount of State fiddling with work permit rules, and no advertising campaign, will address that.

The industry must also fix its own issues.