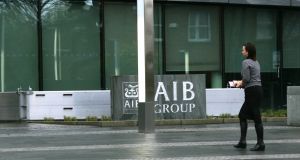 AIB is one of the institutions that could fare the worst if the PAC’s plans for a sunset clause on losses is introduced. Photograph: Cyril Byrne/The Irish Times

Encouraging domestic and EU ownership of Irish property is among an Oireachtas committee’s suggestions for dealing with the “unacceptable level of risk” the Irish economy is bearing in relation to corporation tax receipts.

The Public Accounts Committee has also proposed restricting losses that can be carried forward for tax purposes and analysing the scale of double taxation relief. The recommendations are contained in a report that followed a review carried out by the Comptroller and Auditor General (C&AG) of the factors contributing to the volatile and highly concentrated nature of corporation tax receipts.

“The PAC finds that this represents an unacceptable level of risk to the sustainability of the corporation tax regime and calls on the Department of Finance to carry out a review of the corporation tax system and bring forward proposals to address the risks associated with its highly concentrated nature,” Mr Fleming said.

To counter this concentration risk, the committee made a number of recommendations, including getting a breakdown on losses carried forward by companies.

While it is understood that some €214 billion in losses were carried forward at end-2016, Revenue was unable to give a breakdown on the proportion of actual trading losses and unused capital allowances.

The financial and insurance sector accounted for the largest proportion of losses carried forward in 2015, at more than 50 per cent of the total, with some €124 billion. It was followed by administration and support services (€38 billion) and IT (€10.5 billion).

As such, the PAC wants Revenue to carry out an age analysis and put in place procedures to analyse losses carried forward in order to identify those relating to trading losses and those relating to unused capital allowances.

As previously suggested, the committee also wants the department to consider the introduction of a 10-year time limit or sunset clause and/or other restrictions in respect of losses carried forward.

“The introduction of some restrictions on losses forward would have the effect of increasing corporation tax receipts on an annual basis,” Mr Fleming said.

Such a move would follow some international trends; Canada has introduced a 20-year limit, while the Netherlands has a nine-year limit and Switzerland a seven-year limit.

It is understood that the introduction of such a clause could hit State-controlled AIB and Permanent TSB the hardest, but the committee accepts this, noting that such a clause “could reduce the value of the State’s investment in certain institutions”.

The committee also wants a detailed analysis of double taxation relief, which reduced corporation tax receipts by €948 million in 2015.

“The Department of Finance should ensure mechanisms are in place to verify any claims for double taxation relief made in Ireland by companies that are non-resident in Ireland,” Mr Fleming said.

The research and development tax credit, which allows companies, typically multinationals, to reduce their tax bills, was also looked at, with the cost of the credit to the exchequer increasing by 171 per cent in the five years to 2015, while the number of claimants increased by 46 per cent. The cost of the R&D tax credit in 2016 was €674 million.

The PAC also raised concerns that the high percentage of Irish property now owned by non-Irish and non-EU institutions, who came into Ireland and acquired property after the crash, “poses a risk to Ireland’s tax base”. As such, it wants the department to carry out a review of the Real Estate Investment Trust (Reit) regime to “ensure that domestic and EU ownership is being encouraged appropriately”.