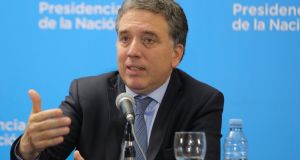 Argentina and the International Monetary Fund said on Thursday they reached an agreement for a three-year, $50 billion (€42 billion) standby lending arrangement, which the government said it sought to provide a safety net and avoid the frequent crises of the country’s past.

Argentina requested IMF assistance on May 8 after its peso currency weakened sharply in an investor exodus from emerging markets. As part of the deal, which is subject to IMF board approval, the government pledged to speed up plans to reduce the fiscal deficit even as authorities now foresee lower growth and higher inflation in the coming years. The deal marks a turning point for

Argentina, which for years shunned the IMF after a devastating 2001-2002 economic crisis that many Argentines blamed on IMF-imposed austerity measures. President Mauricio Macri’s turn to the lender has led to protests in the country. “There is no magic, the IMF can help but Argentines need to resolve our own problems,” Treasury Minister Nicolas Dujovne said at a news conference. Dujovne said he expected the IMF’s board to approve the deal during a June 20 meeting. After that, he said he expects an immediate disbursement of 30 percent of the funding, or about $15 billion.

Argentina will seek to reduce its fiscal deficit to 1.3 percent of gross domestic product in 2019, down from 2.2 percent previously, Dujovne said. The deal calls for fiscal balance in 2020 and a fiscal surplus of 0.5 percent of GDP in 2020. “This measure will ultimately lessen the government financing needs, put public debt on a downward trajectory, and as President Macri has stated, relieve a burden from

1 Pepsi-Cola to build second factory in Cork with potential for 250 new jobs
2 Banks urge borrowers facing hit from new restrictions to engage
3 Covid-19 has shown that much of ‘normal’ life should have been binned years ago
4 Level 5 restrictions risk pushing economy into double-dip recession
5 Find out who tweeted it first
6 Budget 2021 main points: Up to €5,000 a week for Covid-hit firms, hospitality VAT rate cut
7 New hotel planned for Dublin’s Liberties
8 LetsGetChecked and Chargify to create new jobs in Dublin
9 How to avoid a communication breakdown
10 Looking to postpone your tax payment? Revenue sets December deadline
Real news has value SUBSCRIBE