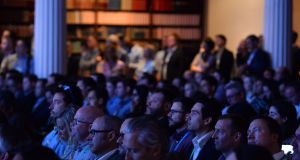 Ireland’s corporate tax regime is back in the international spotlight today. The Republic is the biggest “tax haven” in the world used by multinationals to shelter profits, according to a new study by economists from the US and Denmark. The research, which has been rejected by the Department of Finance as “overly simplistic” claims the State shelters more multinational profits than the entire Caribbean.

Meanwhile, the EU Commission is proposing to fund a significant part of its next budget through the proposed Consolidated Common Corporate Tax Base (CCCTB). The move to harmonise corporation tax rules across the bloc has yet to be agreed by member states and is vehemently opposed by the Irish Government, which views it as a threat to the State’s €8 billion corporation tax base.

It all comes as the Dáil’s Public Accounts Committee is due to public a report on corporation tax later today.

IDA Ireland has recently witnessed “a slowdown of decision making” from potential US investors, due to attempts by Donald Trump to discourage US companies from investing abroad. IDA chief executive Martin Shanahan was speaking at the launch of its annual report. It reported that investments announced by its clients in the first half of 2018 will create about 11,300 new jobs.

There is more good news on the jobs front this morning on news that US tech firm Oath plans to double its global users to 2 billion by 2020, with the Dublin-based European headquarters set to play a significant part in its international expansion. Oath was formed last year from the combination of AOL and Yahoo.

Staying with tech and the world of Blockchain and bitcoin descended on Dublin this week for the Web Summit spin-out Moneyconf. The fintech conference at RDS attracts more than 5,000 attendees from 84 countries and Web Summit co-founder and chief executive Paddy Cosgrave said the organiser may hold other conferences in Dublin.

State-owned health insurer VHI has brought to an end its funding and reinsurance agreement with the Warren Buffett-owned Berkshire Hathaway, whose €90 million loan in 2015 paved the way for the insurer to be authorised. The early repayment of the loan, which was due to run for seven years, means VHI will save €8.1 million a year in interest payments, or some €40.5 million in total.

In her London Briefing, Fiona Walsh previews today’s WPP agm, which promises to be a fiery affair after salacious rumours about ex-boss Martin Sorrell appeared in print.

In his column Cliff Taylor warns that despite some positive signals of a softer Brexit from yesterday’s vote, businesses need to prepare for the worst outcome.

Jack Fagan reports, in the commercial property section, how two thriving hostels in Dublin and Galway form part of a mixed portfolio for sale at €11 million. He also reports the sale of a new four-storey office block outside Cork city for €21 million.