Council paying rents up to €2,800 a month for affordable housing 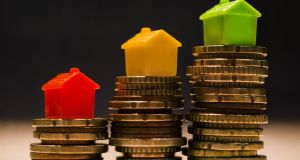 Government policy has contributed overall to an increase in prices in rent, says Dermot O’Leary of Goodbody Stockbrokers. Photograph: iStock

Dublin City Council is paying as much as €2,800 a month – considerably more than Government-set limits – to a landlord to house a family in the city, reflecting the ongoing rental crisis as local authorities struggle to find homes within agreed limits.

According to figures obtained from the Department of Housing, while average payments under the Housing Assistance Payment (HAP) scheme came to €1,270 as of March 31st, the highest payment, of €2,800 a month for a four-bed detached house, is going to house a family with three or more children. This is 44 per cent more than the maximum payment allowed under the scheme, of €1,950 a month, although the Minister of Housing has discretion to allow a rate higher than this.

In nearby Fingal County Council, the highest monthly payment, of €2,046, went to house a family with three or more children renting a four-bed semi-detached house, while in both South Dublin Council and Dún Laoghaire Rathdown, the highest payment was €1,950. The lowest payments ranged from €270 a month for a single person sharing a house in South Dublin Council area to €400 a month in Fingal.

HAP is paid to people who qualify for social housing support. Some 36,000 households across the country benefit from the scheme, at an annual cost of about €301 million, and as rents in the private rental market have soared, payments to those qualifying for the payment have also increased, in some cases beyond stated limits. It means that for some, HAP is seen as another inflationary factor in an already rocketing rental market.

Ultimately there’s just not enough supply to go around. So it’s hard to see what they can do to prevent this and make sure their clients are accommodated

“Undoubtedly the Government policy around provision of social and affordable housing, through use of the private sector stock, has contributed overall to an increase in prices in rent,” said Dermot O’Leary, economist with Goodbody Stockbrokers. “It has an impact on overall demand, and price as well, in a supply constrained market.”

Under HAP, tenants must find their own property, and the local authority makes payment directly to the landlord. This means that in an already very tight rental market, both private renters and those with assistance from the State are chasing the same properties, which can push up rents further. According to the property investment company Ires Reit, for example, at the end of 2017, about 4 per cent of its portfolio, or 100 apartments in total, were let to tenants in receipt of HAP.

John McCartney, director of Savills Ireland Research, says that councils are faced with a bit of a conundrum, in that if the councils won’t pay market rates, then those in search of housing assistance will be without a home.

“Ultimately there’s just not enough supply to go around. So it’s hard to see what they can do to prevent this and make sure their clients are accommodated,” he said.

Under HAP rules, the scale of payments depends on the number of people in a household and the rental market in the local authority area. Limits were increased in July 2016. For example, the maximum payment allowable for an adult renting a room in Dublin is € 430 a month, rising to € 500 for a couple. However, where an adult or a couple has a child, the payment rises to € 1,250 a month across Dublin, or € 1,300 for three or more children.

Councils can exceed these limits by a further 20 per cent where necessary, because of local rental market conditions. So, for example, the family with three children could apply for a payment of up to € 1,560 a month. In addition, when councils are seeking to place homeless families, they can apply an additional discretion, of up to 50 per cent above the rent limits. This means for example that this family could then seek a payment of up to € 1,950. More than 2,800 households are currently being supported by the Homeless HAP scheme, according to the department. And the Minister for Housing can approve a further increase for household types that fall outside of those defined in regulations, such as when the family has more than three children.

According to the department, about 25 per cent of tenants exceed the maximum rent limits. In Dublin City Council, this figure is closer to 30 per cent (or 71 per cent when discretion under the homeless HAP scheme is included), while three-quarters exceed the limits in Dún Laoghaire-Rathdown and 52 per cent in Fingal, but just 2.6 per cent in South Dublin.

While organisations such as the Simon Community have argued for an increase in limits to offset price hikes in the rental market, Mr O’Leary said that doing so “will simply act to push up rents even further”.