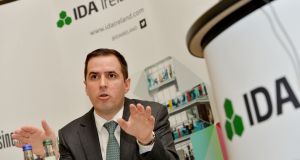 Martin Shanahan, the chief executive of the IDA, estimated that “in excess of 40” companies have chosen to invest in Ireland as a direct result of Britain’s impending exit from the EU

IDA Ireland, the State agency for foreign investment, has recently witnessed “a slowdown of decision making” from potential US investors, due to attempts by Donald Trump to discourage US companies from investing abroad.

When asked if there has been a “Trump effect”, Martin Shanahan, the IDA’s chief executive, said the US president’s corporate tax reform and his rhetoric against US companies who invest capital abroad has yet to have an impact on the value of investment flows to Ireland.

In recent months, however, he said some potential US investors to Ireland were “taking stock” of the attitude of the administration of Mr Trump, which has adopted a stance of economic nationalism.

“The head of one US potential investor told me they would have to, as he put it, run the numbers again,” said Mr Shanahan, who was speaking at the launch in Dublin on Tuesday of its annual report and its mid-year results.

He said where US investors decided still to “internationalise”, the IDA aims to have Ireland at the top of their list of potential locations.

IDA revealed that investments announced by its clients in the first half of 2018 will create about 11,300 new jobs, up from 11,000 over the same period last year. It reported “a very strong” pipeline of new jobs from by multinationals.

IDA client companies announced 139 projects in the first half of the year, up from 114 over the first six months of 2017. More than 50 of the projects were in regions outside of Dublin.

Technology, financial services and pharmaceuticals were among the strongest performing sectors. Among the largest announcements in the first six months were 600 jobs by Edwards Life Biosciences in Limerick, and 400 roles by Chinese biopharma company Wuxi in Dundalk.

Mr Shanahan estimated that “in excess of 40” companies have chosen to invest in Ireland as a direct result of Britain’s impending exit from the European Union. He said Brexit played a role in the investment decision making of many more companies.

The State agency said it is still talking to a range of other potential investors from sectors including legal services, broadcasting, medical devices and pharmaceuticals, “all of which are looking at their arrangements following Brexit”.

Mr Shanahan insisted that the IDA is winning more projects from foreign investors for the regions outside Dublin.

He estimated that the number of new such projects totalled 344 over the last 3½ years under its latest strategy, compared to 346 over the full five years of its previous strategy.

Mr Shanahan warned, however, that Ireland needs to keep a “relentless focus” on maintaining competitiveness, amid a climate of rising business costs.

“Unless Ireland stays competitive, we will not continue to see these investment numbers... IDA Ireland will continue to work with Government to ensure that those areas prioritised by investors are addressed,” he said.

Heather Humphreys, the Minister for Business, Enterprise and Innovation, said the Government is “100 per cent committed” to retaining Ireland’s “competitive edge”.

1 Will your boss let you work long-term from home – or from abroad?
2 Plans for €2bn Dart expansion lure Bombardier to Dublin
3 Virgin Media unveils new entertainment platform
4 Subway bread too sweet for the Irish tax authorities
5 Not just another brick in the wall
6 Google tells workers to return to country where they are employed
7 City firms move £1.2tn and 7,500 jobs out of London - EY
8 AA Ireland bought by Olivier Sarkozy-led fund for more than €240m
9 Only half the homes needed this year will be built, construction event told
10 McGuinness faces Brexit and Covid grilling at parliamentary hearing
Real news has value SUBSCRIBE