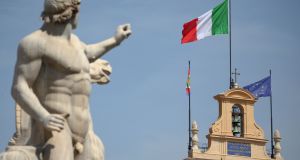 Several factors are affecting sentiment on Italian bonds, according to analysts.

Italian government bonds were under pressure on Friday and a key measure of investor concern over the attractiveness of its debt climbed, with investors eyeing the fraught political situation and bracing for an upcoming European Central Bank meeting.

A fall in the yield on the equivalent German Bund brought the gap between the two to 2.633 percentage points. The jolt higher in the Italy-Germany spread, seen as a proxy for the risk premium demanded to hold the Italian paper, brings it closer to the 2.828 percentage points closing level hit during last week’s turbulence.

Looking at the shorter end of the curve, the two-year Italian yield rose 20.3 bps to 1.712 per cent. It is still well off last week’s highs above 2 per cent, but the bond is on track to post its largest weekly rise in yield since 2012, Reuters data show.

Several factors are affecting sentiment on Italian bonds, according to analysts. Strategists are uncertain over how the newly-formed populist government will work with Brussels, and also over its fiscal plans.

At the same time, a string of hawkish speeches from ECB policymakers earlier this week have revved up expectations that the central bank will announce next week the end of its bond buying programme. Quantiative easing has been a boon to euro zone government debt, helping push yields lower.

1 Former junior minister Michael D’Arcy did not contact ethics watchdog over new job
2 Mortgage breaks will not be extended beyond this week
3 Three Ireland switches on 5G network around the country
4 Pilita Clark: The looming legal minefield of working from home
5 State ‘should bail out’ troubled homeowners with mortgage assistance payment
6 State should use Covid-19 impact on building costs to build homes
7 New car prices could rise by up to €10,000 if taxes increase in budget
8 Dublin-based ID-Pal raises €1m in funding as it looks to expand
9 Me & My Money: ‘Money can’t buy you happiness but it can make life a lot easier’
10 QIH’s earnings hit €26.6m in 2019 as company changes name to Mannok
Real news has value SUBSCRIBE