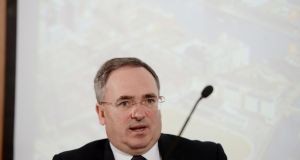 Brendan McDonagh CEO Nama: agency has increased its projected surplus by 17 per cent to €3.5 billion.

Minister for Finance Paschal Donohoe could wind up State assets agency Nama in 2020, despite hints from the organisation’s chairman Frank Daly that its work should continue for several years.

According to Mr Daly, Nama believes that it will deliver a €3.5 billion surplus to the State when it has finished its work, 17 per cent more than its previous €3 billion estimate.

The State will not get that €3.5 billion until Nama clears its remaining €1.1 billion debt and finishes its work.

Mr Donohoe said that he was not planning to extend the agency’s life beyond 2020, when he has already indicated it would be wound up.

He added that the Government had to decide carefully about the future of sites Nama’s control that could be used to build new homes and deliver other benefits.

The minister indicated that Nama staff could play a role in House Building Finance Ireland, a Government plan to raise cash to ease the Republic’s housing crisis.

“Through initiatives like house building finance I want to ensure that, the expertise and staff that have been developed by Nama in the delivery of homes and commercial property in Ireland, that we provide an avenue through which that can be retained for the State,” he said.

Mr Daly argued that properties under Nama’s control including the Irish Glass Bottle site in Ringsend, Dublin, which has space for 3,500 homes, and along the proposed route of the capital’s metro rail line, had huge potential.

“It is likely that these assets will need a work-out period that will extend, some time, some years into the future,” he said. “We will not get the best return by selling these assets in the short term.

“It would be foolish indeed to dispose of them before the necessary local area plans and the necessary infrastructure is in place.”

He noted that some of those businesses have recovered enough to repay the agency the full amount of their original debt and the interest.

Last year, Nama earned €2.56 billion from selling loans and property allowing the organisation to repay the final €2.6 billion of its €30.2 billion senior debt.

Mr McDonagh called 2017 a landmark year. “We achieved our objective of eliminating our €30.2 billion senior debt three years ahead of schedule and we made a strong profit for the seventh year in a row,” he said.

Nama borrowed €31.8 billion to buy property loans from the banks. It has repaid €500 million of its subordinated debt and wants to clear the remaining €1.1 billion by 2020.

Since 2014 it has funded the construction of 7,300 homes. Another 3,800 are under way or have finance approved while its clients have planning for a further 7,500. Applications have been lodged or will be lodged for another 8,500.

Nama is also working on the redevelopment of key areas of Dublin’s docklands with the likes of Ballymore Properties and Kennedy Wilson. Mr McDonagh said yesterday that this would determine the shape of the area for the “next 200 years”.