Agency sold €15.4bn of long-term bonds this year, at the lower end of its full-year target 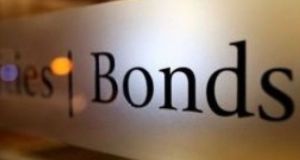 The NTMA’s bond redemptions are set to fall after 2020.

The National Treasury Management Agency (NTMA) plans to raise between €10 billion and €14 billion in the bond markets next year, less than in 2019. The agency plans to focus on repaying debt as the Government forecasts a broadly balanced budget.

The NTMA sold €15.4 billion of long-term bonds this year, at the lower end of its full-year target of €14 billion to €18 billion.

“The NTMA’s pre-funding strategy has given us significant flexibility entering 2020,” said Frank O’Connor, the NTMA’s director of funding and debt management. “Our opening cash balance is projected to be in excess of €15 billion, which means that despite facing redemptions totalling almost €20 billion, our funding requirement is lower than in previous years.”

The biggest single bond maturity is €10.6 billion of debt that falls due in April. A further €6.5 billion falls due in October.

Minister for Finance Paschal Donohoe, whose government faces a general election next year, said last week that he is aiming to run a budget surplus over the coming years, rising to 1 per cent of gross domestic product (GDP) or 1.7 per cent of the underlying economy by 2022. The State finances returned to a modest surplus last year for the first time since 2007.

Bond redemptions are set to fall after 2020. “This follows our programme of extending the average maturity of Irish government bonds, which has increased to close to 10 years and is now one of the longest average maturities in Europe, ” said Mr O’Connor.

The NTMA typically starts the year as one of the first European sovereigns to come out with a benchmark, multibillion-euro bond sale. Market observers expect the agency to follow this pattern in early January.