European companies are ‘settling in’ to the trade war, Chamber president says 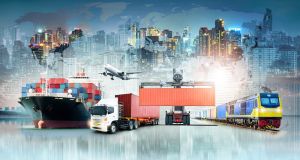 And while some companies have shifted investment out of China, around the same number have increased investment in the country to produce more locally and avoid tariffs crossing borders, said a report by the European Union Chamber of Commerce in China. This undercuts the US goal of discouraging investment in China, the report said.

While some small- and medium-sized European companies, especially those that make very high-quality goods, are able to pass costs from higher tariffs along, others are taking a “steady beating,” said the report.

Mr Wuttke had little hope the ‘phase one’ deal could benefit other countries by affecting systemic issues such as subsidies and market access in the world’s second-largest economy.

China and the US are trying to hash out the interim deal before a new round of tariffs kicks in on December 15th, covering about $156 billion of Chinese imports.

“Maybe my children will see a ‘phase two’,” said Mr Wuttke, referring to a more ambitious later-stage deal which might touch on more structural issues.

While larger European firms can manage US-China trade tensions, they are not managing to take advantage of it, Mr Wuttke said. “I have not seen a single case where we benefited.”

1 Opioid executive admits to ‘no morals’ ahead of prison term
2 Little strategic thinking in election manifestos of Fine Gael and Fianna Fáil
3 My father in a nursing home wants to gift me his house
4 CPL founders Anne Heraty and Paul Carroll in line for €1m dividend payout
5 Q&A: Why has the pension age question suddenly become an election issue?
6 Cosgrave should give his speech to Web Summit’s partners in Saudi Arabia
7 South Dublin Credit Union members urged to borrow more to ensure survival
8 ‘If you don’t like challenges, you should not be in the airline business’
9 Ryanair wants Irish courts to block Skyscanner from selling its flights
10 Cathay Pacific to resume Dublin-Hong Kong flights in March
Real news has value SUBSCRIBE