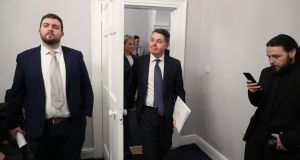 Minister for Finance Paschal Donohoe has set out targets to run budget surpluses and reduce the State’s debt in the coming years to help prepare the public finances for changing international tax rules and the “clear and present danger” of a slump in corporation tax receipts.

The Government, which faces a general election next year, is aiming to run a budget surplus over the coming years, rising to 1 per cent of gross domestic product (GDP) or 1.7 per cent of the underlying economy by 2021, Mr Donohoe said on Tuesday.

The underlying economy is measured as GNI*, or gross domestic income, which excludes the impact of multinationals. The State finances returned to surplus last year for the first time since 2007.

Speaking at an event hosted by the Institute of International and European Affairs, the Minister also outlined a plan for government debt to fall to 60 per cent of GNI* over time from about 100 per cent currently. As an interim target, the debt ratio would be cut to 85 per cent by 2025, he added.

The objectives, premised on an orderly Brexit, were unveiled as the Minister warned that “change is coming and changes will have an impact on . . . our economic model” as the Organisation for Economic Co-operation and Development (OECD) leads an international effort to change how tax is levied globally in a digitalised economy.

Meanwhile, the Minister said that higher-than-expected corporate tax income seen in recent years “will not last forever” and such receipts are expected decline from 2021 after a further likely increase next year.

“We cannot ignore the clear and present danger of a fall-off in corporation tax receipts,” he said.

Figures out on Tuesday show that that Revenue received a record €3.1 billion of corporation tax in November, almost 30 per cent higher than expected, and that this line of income is set to hit an all-time high of €11 billion for 2019 as a whole.

“As a previous minister for finance once said, it is difficult to run a surplus in a democracy,” Mr Donohoe said, referring to comments made by boom-time minister Charlie McCreevy to the Oireachtas banking inquiry in 2015. “But let me say that surplus is not a dirty word. Running fiscal surpluses over the economic cycle is an effective response to looming threats.”

However, Mr Donohoe has committed to supporting the OECD’s current efforts to design digital-tax rules.

“I have consistently argued that tax competition is a legitimate form of competition between countries looking to attract investment to their shores. This is especially the case for geographically disadvantaged countries such as Ireland. I will continue to argue that point within the OECD framework,” he said.

“But I want to be clear. The precise form and timing of these changes may be up for debate, but their introduction is not.”

1 Passengers face queuing in car parks at Dublin Airport
2 Major credit union plans to limit savings accounts to €40,000
3 Brother is dragging his heels as executor of uncle’s will - is there anything I can do?
4 Pandemic payment may be tapered based on previous earnings
5 Ten of the most mysterious aircraft disappearances
6 Credit union limit, Penneys stays shut, more stimulus and shopping for Ireland
7 Tesla’s Elon Musk calls for breakup of Amazon in tweet
8 Revenue tells court it was entitled to raise €1.64bn tax assessment against Perrigo
9 Land dispute between Citywest Hotel owner and neighbours before court
10 Nazi-forged fortune creates hidden German billionaire
Real news has value SUBSCRIBE