Tenants facing premium of €4,020 per year for proximity to rail, survey finds 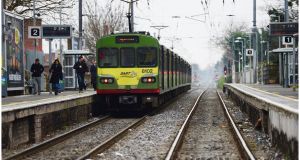 'I used to live (rent) in Bray, and could take the Dart from there to what was my workplace, on Merrion Road.' Photograph: Bryan O’Brien

Monthly rents for properties close to Dart and Luas stops are now 15 per cent more than the Dublin average of €1,968, according to new research from property website Daft.ie.

Renters living close to Dublin’s light rail network are now paying a premium of €4,020 per year compared to the average rent in the capital.

The research, published on Tuesday, analyses the average rental prices of three bed semi and two bedroom apartments within 1km of each rail stop in the Greater Dublin area between October 2018 and September 2019.

On the Luas, homes close to Spencer Dock on the red line command the highest average rents (€2,881), while those living near Charlemont (€2,708) pay the most on the Luas green line.

“When it comes to rail, density is important, as rail has large upfront costs and greater population density spreads those costs among more users,” he said.

“This is important to bear in mind when planning where to build both transport and homes over the coming years. If Ireland wants to make its transport systems more sustainable, it should consider how to facilitate density.”

“Luas passengers have increased by 15 per cent since last year which shows the growing demand for reliable rail services in the city,” she said.

“This is also reflected in our report where rent for properties near Dart and Luas stops are now 15 per cent higher than the Dublin average. This works out as over €300 more per month, which really reveals the high costs of convenience for commuters.”

Most expensive (All Stops & Stations)