Nafta negotiators aim for ‘ambitious’ first round of talks

Canada, Mexico and US negotiators seek to fast-track a deal to modernise free trade pact 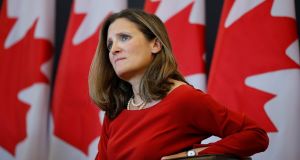 Canadian foreign minister Chrystia Freeland suggested earlier this week Canada could walk away if the US insisted on scrapping the mechanism to resolve trade disputes between the three Nafta countries. Photograph: Chris Wattie

Negotiators from Canada, Mexico and the United States are aiming for an ambitious first round of trade talks, a senior US official said on Tuesday, as the countries try to fast-track a deal to modernise the pact by early next year.

The United States Trade Representative official, speaking to reporters on a conference call, said all sides would submit a substantial number of proposals during the first week of the talks aimed at renegotiating the North American Free Trade Agreement (Nafta) in Washington. The talks start on Wednesday.

“We are actually going to be quite ambitious in this first round,” the USTR official said, without elaborating.

The talks follow threats by President Donald Trump during his presidential campaign to ditch the 1994 Nafta agreement, which he said had hurt US manufacturing and drained jobs to low-wage Mexico. Mr Trump said later he had been convinced by Canada and Mexico to renegotiate the pact.

While US administration officials have said there is no firm deadline to reach an agreement, Mexico is pushing to finish before its presidential campaign begins in earnest in February.

The United States has said its top priority for the talks is shrinking the $64 billion US goods trade deficit with Mexico, as well as a much smaller $11 billion deficit with Canada.

It also wants to deter currency manipulation by trading partners, strengthen Nafta rules of origin, and eliminate a trade dispute mechanism under so-called Chapter 19, which Canada wants to keep in the agreement.

Canadian foreign minister Chrystia Freeland suggested earlier this week that Canada could walk away from the talks if the US insisted on scrapping the mechanism to resolve trade disputes between the three Nafta countries.

The USTR official, who spoke on condition of anonymity, said alterations to the rules of origin to ensure Nafta tariff-free benefits go to member countries were a key objective of the talks. But he did not say whether the States would seek US-specific content rules or to increase the local content requirements for North American-produced cars and trucks.

Car industry executives are opposed to the US negotiating objectives to tighten the rules of origin, especially for vehicle parts.

“In terms of the rules of origin, the overall goal is to address concerns about doing more to incentivise and create more manufacturing and more manufacturing jobs in the United States,” said the official. “I think each country expects benefits for itself from those rules of origin, and I think that’s what you’re seeing reflected in our objective statement.” – (Reuters)

1 Lockdown exit: How can Irish economy reopen without big health risks?
2 Coronavirus: The online scams, apps and trends you need to know about during the pandemic
3 I want to change my will quickly in case I fall ill. Do I need a lawyer?
4 Business owner waiting over a month for overdraft approval
5 Property market has not felt full impact of Covid-19, warns Sherry FitzGerald
6 Half of Irish SMEs expect revenue to fall by at least 60% in next three months
7 Cold water poured on idea of ‘helicopter money’
8 Deliveroo branches into grocery deliveries in Ireland
9 Government announces €1bn in supports for businesses
10 After getting ahead in Covid testing, Berlin now hopes to get ahead in recovery
Real news has value SUBSCRIBE