European shares on track for worst week of 2017 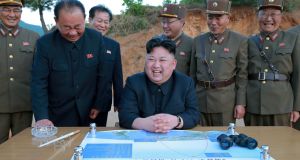 Worldwide political tensions have had a negative effect on equities this week. Photograph: Reuters

A sell-off among heavyweight basic resources stocks heightened the third day of losses for European shares and put them on track for their worst week this year as ratcheting political tensions dented equities worldwide.

The pan-European STOXX 600 fell 0.7 per cent, taking its weekly losses to 2.4 per cent, its worst since early November last year.

Euro zone stocks and blue-chips also dropped 0.7 per cent, while the miner-heavy FTSE underperformed and was down 0.8 per cent.

Eurostoxx volatility, the main European gauge of equity investor anxiety, jumped to a near four-month high, though it remained near historically depressed levels.

Asian and US equity markets had extended their sell-off overnight as a war of words between the US and North Korea intensified.

On Friday basic resource stocks dropped 2.6 per cent to a month low as Chinese base metal prices collapsed as political pressures took their toll.

Falling crude prices made oil & gas stocks a weight too, dropping 1 per cent with Tullow Oil the top faller.

Banks also fell 0.9 per cent, putting the index on track for its worst week in nine months.

UK mid-cap Dixons Carphone was the worst-performing on the STOXX, falling 7.6 per cent after a top-rated Exane BNP Paribas analyst cut the retailer by two notches to “underperform”, citing concerns about its mobile business.

The probability of a market correction is increasing, HSBC’s European equity strategists said. The MSCI Europe index has enjoyed a 406-day run of near uninterrupted gains, which they said was its second-longest stretch in the post-crisis bull market.

7 The lockdown may squash the virus but what will it means for Ireland's economy?