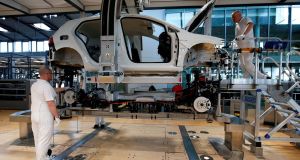 Workers assemble an e-Golf electric car at the Volkswagen plant in Dresden: The German economy growth rate for the first quarter has been revised up to 0.7 per cent on the quarter. Photograph: Fabrizio Bensch/Reuters

The German economy grew by less than expected in the second quarter as net trade dampened an overall expansion which was driven by strong household spending and rising state expenditure, the Federal Statistics Office said on Tuesday.

Seasonally and calender adjusted gross domestic product (GDP) in Europe’s biggest economy rose by 0.6 per cent on the quarter, the data showed. This was slightly weaker than the consensus forecast of 0.7 per cent in a Reuters poll. But the growth rate for the first quarter was revised up to 0.7 per cent on the quarter from 0.6 per cent. Unadjusted data showed the economy grew by 0.8 per cent on the year in the second quarter. This compared with a consensus forecast of 1.9 per cent. Adjusted for calendar affects, the yearly growth rate was 2.1 per cent in the April-June period.

1 Volvo warns of scaled back car line-up if UK splits from EU rules
2 US threatens retaliation against EU over proposed carbon tax
3 NI house builder apologises to Harry and Meghan over adverts
4 Little strategic thinking in election manifestos of Fine Gael and Fianna Fáil
5 CPL founders Anne Heraty and Paul Carroll in line for €1m dividend payout
6 Are there annual limits on inheritances or gifts to a child?
7 Opioid executive admits to ‘no morals’ ahead of prison term
8 Farmer seeks to challenge €3.6bn Intel plan in High Court
9 South Dublin Credit Union members urged to borrow more to ensure survival
10 Who are Ireland’s 17 billionaires?
Real news has value SUBSCRIBE