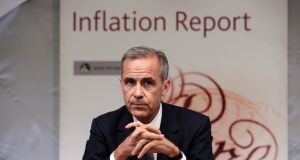 Mark Carney, governor of the Bank of England. The bank cut its forecasts for economic growth and wages last week. Photograph: Simon Dawson/Bloomberg

British consumer price inflation unexpectedly held steady last month as fuel prices fell amid other signs that the squeeze on households’ spending power may slowly be starting to level off.

Official figures on Tuesday showed the pace at which manufacturers’ raw material costs are rising slowed by the most in more than five years as the initial impact of June 2016’s vote to leave the European Union dropped out of annual comparisons.

Consumer price inflation held unchanged at 2.6 per cent in July compared with the average expectation in a Reuters poll of economists for it to rise to 2.7 per cent, the UK Office for National Statistics (ONS) said.

Further price rises may still be in train, as the Bank of England predicted at the start of the month that inflation would reach about 3 per cent in October, after earlier touching a four-year high of 2.9 per cent in May.

Britain’s biggest energy supplier, British Gas, has said it plans to increase electricity prices by 12.5 per cent in September. And most rail fares will rise next year by 3.6 per cent, July’s rate of retail price inflation – an older measure that the ONS says is no longer reliable, but which is widely used in British commercial contracts.

However, a softer outlook for inflation will reduce the chance of more BoE policymakers joining the minority who are calling for a rate rise now.

There was some good news for manufacturers, who saw the inflation rate for raw materials drop to 6.5 per cent from 10.0 per cent, its lowest rate in a year and the sharpest month-to-month fall in that rate since April 2012.

Rising inflation has squeezed household incomes this year, causing spending and broader economic growth to slow, as wages have failed to keep pace with the rising cost of living.

An ONS measure of core consumer price inflation – which strips out changes in the price of energy, food, alcohol and tobacco – held steady at 2.4 per cent compared with economists’ expectations for it to rise to 2.5 per cent.

Factory gate price inflation slowed slightly less than expected, dropping to 3.2 per cent compared with forecasts of 3.1 per cent.

The BoE expects consumer price inflation will only fall slowly, and to remain above its 2 per cent target for the next three years, based on its experience of a previous fall in sterling 10 years ago at the start of the financial crisis.

The ONS also released figures for house prices in June, which showed a 4.9 per cent annual rise across the UK as a whole compared with 5 per cent in May, the weakest increase since March. Prices in London alone grew by 2.9 per cent.