Some leading companies have set or met gender balance targets. Others, not so much 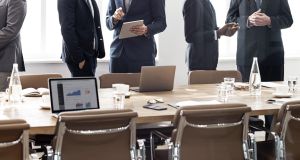 In an analysis of the boards of 31 Irish publicly quoted companies, ‘The Irish Times’ found that women accounted for shy of 16 per cent of the board seats. Photograph: iStock

When the late Gillian Bowler became the chairwoman of Irish Life & Permanent in June 2004, she was the first woman to fill that role in any Irish public limited company (plc). Thirteen years later, the boardrooms of listed companies remain predominantly male.

Since 2011, a year that marked a major push for female representation on boards, there has been some progress. But in Ireland that progress has been slow and often underwhelming. Despite widespread acceptance that balanced and diverse boards are better for business, men hold sway over women. “Far more remains to be done,” as one company, Tullow Oil, put it.

In an analysis of the boards of 31 Irish publicly quoted companies – 26 listed on the main market of the Irish Stock Exchange (ISE) and five listed only outside Ireland (Greencore, UDG Healthcare, Grafton, DCC and Ardagh) – The Irish Times found that women accounted for shy of 16 per cent of the board seats.

When it comes to gender balance in the boardroom, Ireland lags the UK. Indeed, Irish companies have only just caught up to the stage the FTSE 100 was at back in 2011, when 14 per cent of its board members were female.

This was the year when a report spearheaded by Mervyn Davies, a former UK trade minister and former chief executive of the bank Standard Chartered, set a voluntary target of 25 per cent female representation by 2015, with the threat of Norway-style quotas hanging over companies if they did not act.

It worked. In 2015, as women accounted for a quarter of FTSE 100 directors for the first time, Davies set a new target of 33 per cent by 2020, this time for the boards of the broader FTSE 350 index. The campaign continues to enjoy the high-level political support that many believe would be helpful here.

“Much more needs to be done to raise awareness,” says Mary Brassil, a partner and employment expert at law firm McCannFitzgerald. The examples provided not just by the UK, but by Finland and Sweden, suggest that voluntary initiatives can work if given the right backing, she notes.

Installing a sole female voice on the board – a practice Davies once told The Irish Times was “a total joke” – is simply not enough, Brassil says. “Studies have shown you need to have a minimum of three, so there is no sense of marginalisation. You need to have a core group.”

The stocks in our study were asked to state the company’s policy on the gender balance of its board of directors and what specific plans they had in place, if any, to either ensure ongoing gender balance or improve the representation of women on their boards.

Three companies analysed have 33 per cent female board representation: CRH, FBD and DCC.

At building materials group CRH, the largest company on the Iseq and also a member of the FTSE 100, four of the 12 directors are women. The cement-maker was one of several companies to note that its industry “traditionally” attracts more male than female employees. Nevertheless, its diversity programmes have widened what it referred to as “the pool of talent available” to its board nomination committee.

When The Irish Times did a similar analysis in 2011 (when just 7.5 per cent of boardroom positions at the top 25 companies on the Iseq were held by women), CRH had only one female director. It got to where it is today by pursuing a 25 per cent target and then exceeding it.

At insurance company FBD, there are six men on the board and three women, including the still relatively rare phenomenon of a female chief executive in Fiona Muldoon, while the same ratio exists on the board of London-listed DCC, a sales, marketing and support services group with interests in energy, retail, healthcare and technology.

Stocks listed on the ISE’s Enterprises Securities Market (ESM), several of which hail from sectors like mining and exploration, were not included in this study, and a recent analysis of all Iseq boards by global executive search firm Accreate indicates they would have dragged down the female representation rate to 14 per cent.

One ESM stock worth highlighting for positive reasons, however, is agri-food company Origin Enterprises, which has even better boardroom balance than CRH, FBD and DCC: four of its nine directors are women, including chief financial officer Imelda Hurley and chairwoman Rose Hynes.

Under ISE rules, Iseq companies are meant to adhere, on a “comply or explain” basis, to the UK Corporate Governance Code. This states that company annual reports should include a statement of the board policy on diversity and gender.

Several companies referred to their diversity and gender statements, while some with one or zero women directors made sure to mention recent female retirees, such as Ann Grant from the board of Tullow Oil and Sofia Bianchi from resources company Kenmare. Datalex, which has an all-male board, said it was “actively looking” for a female director.

Bank of Ireland sees its boardroom balance shift to nine men and three women from October, when Francesca McDonagh replaces Richie Boucher as chief executive. At that point, it will join AIB in having 25 per cent female representation.

Ryanair, which in 2011 had an all-male board, offered a notably specific summary of its plans, saying it would increase its quantity of female non-executive directors from two to three before the end of 2017 and then to four by the end of 2018.

Paddy Power Betfair, which has two female directors and 10 male ones at present, said it was “committed” to a target of “at least 33 per cent female directors”. Like AIB, the bookmaker noted the importance of ensuring that women were put forward on the long lists of candidates.

But it is fair to say that the majority of responses on future plans were vaguer, with frequent mentions of the phrase “on merit”. No campaign group, it must be stressed, is arguing for underqualified women to be parachuted onto boards; rather they are calling for female talent to be both recognised and developed.

Some companies referenced these campaigns: Tullow Oil said it “continues to support the aspirations set out” in the Davies report, while UDG Healthcare said it was a supporter of the 30% Club.

The 30% Club, an organisation that began in the UK in 2010 has, since 2015, had an Irish chapter that promotes better gender balance at all levels in leading businesses, with a target of 30 per cent female representation in senior management by 2020.

“In order to have 30 per cent women on boards, you need to have more women in the executive pipeline,” says Marie O’Connor, a partner at PricewaterhouseCoopers and the lead for the 30% Club in Ireland.

Alas, research commissioned by the 30% Club has identified a “sticky floor” in Irish business, in which women’s participation in management declines with each level of the hierarchy.

The point is often made that women sometimes “lean out” from corporate careers, the implication sometimes being that it is their own fault for not advancing. Women themselves report that they are pushed out. A recent survey by the Institute of Directors found that 63 per cent of women cited unconscious bias as the main barrier preventing them claiming a seat in the boardroom.

Unbiased selection procedures throughout companies are vital, says Brassil. “Unless you address this right the way down the organisation, very little will change at the top.” – Additional research by Peter Hamilton

Time running out for those wanting to avail of SBCI ‘future growth’ loans 17:35
Profits rise 22% at Gucci Ireland 17:22
EasyJet sees improvement in first half on robust demand for flights 17:22
Disney Plus and Baby Yoda available to Irish subscribers the week after St Patrick’s Day 16:47
Swiss police suspect Davos plumbers of being Russian spies 16:24

1 Who are Ireland’s 17 billionaires?
2 My father in a nursing home wants to gift me his house
3 State subsidises public sector retirees to cover gap until State pension
4 Swiss police suspect Davos plumbers of being Russian spies
5 Are there annual limits on inheritances or gifts to a child?
6 Corporate tax change is inevitable, says Donohoe
7 Insolvency arrangement approved for man with €60 million in debts
8 Countries that fail to attract immigrants will lose out – Microsoft chief
9 Q&A: Why has the pension age question suddenly become an election issue?
10 Domino’s Pizza spared costs despite losing appeal
Real news has value SUBSCRIBE