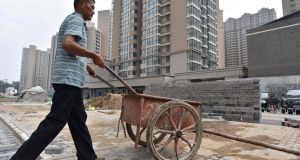 A worker at a housing construction site in Beijing: China’s massive debt is on a “dangerous” path, the IMF warns. Photograph: Greg Baker/AFP/Getty

China’s short-term growth outlook has strengthened but there is growing risk of a sharp medium-term adjustment due to reliance on stimulus to meet targets and a credit-expansion path that may be “dangerous”, the International Monetary Fund said on Tuesday.

The IMF raised its forecast for China’s average annual growth from 2018-2020 to 6.4 per cent from 6 per cent and said there was now a greater chance that authorities would meet their target of doubling 2010 real gross domestic product by 2020.

But it warned of the consequences to long-term economic health.

The main cost of stronger growth “is further large increases in public and private debt”, the IMF said in its annual review of China’s economy.

“International experience suggests that China’s current credit trajectory is dangerous with increasing risks of a disruptive adjustment and/or a marked growth slowdown,” the report said.

The IMF estimates China’s economy would have grown about 5.5 per cent annually from 2012-2016 if credit was expanded at a “sustainable” pace, compared to the average 7.25 per cent that it recorded.

“The key policy imperative is to replace precise numerical growth targets with a commitment to reforms that achieve the fastest sustainable growth path.”

The IMF did not see China making much progress on reducing debt, with the report forecasting that its total non-financial sector debt will increase from about 235 per cent of gross domestic product in 2016 to more than 290 per cent by 2022.

The fund projected that China’s non-financial debt through to 2022 would rise “even more strongly” than it forecast a year earlier.

For this year, the IMF expects China’s economy to grow 6.7 per cent, unchanged from a forecast in July, above the government’s target of about 6.5 per cent, though growth likely peaked in the first quarter.

China’s economy expanded 6.9 per cent in the first half of the year.

The report also included views from Chinese government officials, who agreed this year’s growth would likely “exceed marginally” the 6.5 per cent target, though they disagreed with the IMF on China’s debt, saying it was manageable and its growth was likely to slow further.

The IMF said some of the steps China should take to move to a sustainable growth model include reforming fiscal policy to support greater consumption, accelerate reform of state-owned enterprises and intensify deleveraging efforts.

Over the past year, the IMF said, China has made little headway on state-owned enterprises reform but “substantial progress” in supervising “shadow” financing.

The IMF supported China’s recent policy tightening and increased oversight of financial risks, and said these should continue.

The report said China’s monetary policy has become more market-based as controls on credit as well as lending and deposit rates have been mostly removed, but that the People’s Bank of China should be given “operational independence” in setting interest rates.

But that independence would mean its role should be narrowed to focus only on monetary policy with much greater transparency of policy moves, while macroprudential policy should be separate, the IMF said.

The IMF said China’s control over the yuan exchange rate and capital flows increased in the past year, and recommended that progress should resume on moving toward a market-oriented rate.

China has tightened its grip on capital outflows this year as it looks to preserve foreign currency reserves after significant depreciation pressure on the yuan in 2016. Reserves have increased this year and the yuan has strengthened in the face of a weak US dollar, though there has been no sign of any loosening of capital controls.

The IMF said that while China should move towards capital account liberalisation, only carefully targeted reforms should be considered in the near-term. The report also said inequality in China – including disparities in income and opportunity – is forecast to increase, but that higher public spending on social services, a progressive personal income tax system and a recurring property tax would help to reduce it. – (Reuters)