Moody’s plays down US retail fallout

Debt, over-expansion and rise of online shopping have contributed to problems 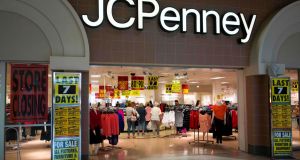 American consumers spent at a brisk pace in July, pushing US retail sales to their biggest increase in seven months, according to official figures. Photograph: Don Emmert/AFP/Getty Images

The number of US retailers that have gone bankrupt in 2017 has surpassed last year’s total, but the sector’s woes will have a “limited” impact on the structured finance market where bonds are backed by a pool of underlying loans, according to Moody’s.

Onerous debts and vast over-expansion – coupled with the rise of online shopping – have rattled the sector. This year 24 US retailers have gone bankrupt, against 11 by this time last year out of a 2016 total 18, according to data from S&P Global Market Intelligence.

Some investors and analysts have fretted that the rise in business failures will affect commercial mortgage-backed securities, collateralised loan obligations and real estate investment trusts, given their exposure to retail, especially shopping malls, which have been under particular pressure.

Credit Suisse has estimated that as many as 8,640 stores with 147m sq ft of shopping space will shut this year.

“Retail is clearly going through some stress – if not distress,” said Michael Temple, head of credit research at Pioneer Investments. “The question is whether there will be waves that cascade into other markets and the broader economy.”

But in a report yesterday Moody’s said such concerns were overblown. Despite the deepening challenges, the risks to CMBS, CLOs, Reits and asset-backed securities based on credit card loans were “marginal”, the rating agency concluded.

Such exposure was still “relatively low, and retail distress is concentrated in particular types of retail companies and real estate”, it said.

Moody’s estimated that only 2.1 per cent of the CMBS it graded were exposed to struggling malls; just two out of 22 Reits had a significant exposure to them; and commercial real estate-backed collateralised debt obligations linked to retail was about 6 per cent.

Second-generation CLOs – repackaged securities made up of slices of loans made towards buyouts – also had relatively little exposure to retail, it said.

The impact of the retail industry’s challenges would “largely be limited to private-label and co-branded credit cards”, said Moody’s.

But the trend for store closures would continue for “several years as the retail industry recreate itself”, it added. “Changing consumer behaviour [including ecommerce] has driven a marked increase in brick-and-mortar retailer bankruptcies and store closure announcements.”

However, Moody’s added that exposure “to troubled retail in US structured finance sectors is limited, posing small-to-modest risks for some asset classes”.

Mr Temple agreed that retail challenges would not have a widespread impact, and said many investors were well aware of the problems in the sector.

“It’s fair to question whether there will be a cascading effect,” he said. “But it’s hard to conclude that it will be severe.”

1 Who are Ireland’s 17 billionaires?
2 My father in a nursing home wants to gift me his house
3 Richer countries must do more to tackle climate change, Thunberg tells Davos
4 Nama lends Cosgraves €15m to fund huge apartment development
5 Health insurance: Switch often for your financial wellbeing
6 Builders completed 21,500 homes in State during 2019
7 Irish whiskey sales slow in US but distillery visitors top 1m locally
8 Are there annual limits on inheritances or gifts to a child?
9 Cubic Telecom raises more than €11 million in funding
10 Property firm sues engineering company over waterproofing of basement
Real news has value SUBSCRIBE