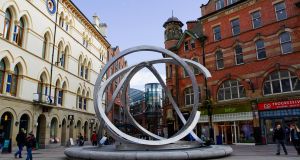 The North’s economy is in decline and four out of five business leaders believe that a recession is looming on the back of Brexit uncertainty, one of the North’s largest business bodies has warned. New research from the Northern Ireland Chamber of Commerce finds half of its members, who between them employ some 100,000 people, have either scaled back investment or put it on hold because of Brexit fallout.

Nearly half of the chamber’s members said Brexit had hit sales, and costs had risen, while 32 per cent also reported difficulties recruiting and retaining employees from other EU countries.

The Quarterly Economic Survey, which is produced with business advisers BDO, highlights a catalogue of “serious concerns” voiced by businesses in the North, from declining order books to cash flow problems and decreasing confidence levels.

The manufacturing sector was under particular stress in the third quarter, recording the worst trade performance in almost a decade. A majority of manufacturers said they expected orders to fall over the coming three months.

Ms McGregor said there was clear evidence that the impact of ongoing Brexit uncertainty was being felt more harshly in the North than anywhere else.

“This is not scaremongering – it is a stark reality check for business leaders, employers, politicians and anyone with a vested interest in the Northern Ireland economy.

“Behind each and every one of these statistics sit thousands of real, local businesses who are feeling the harsh impacts of Brexit uncertainty and the political vacuum at Stormont.

“We need to see immediate action to avoid a messy and disorderly Brexit on October 31st and must have the institutions at Stormont restored urgently – the future success of our economy depends on it,” Ms McGregor said.