Dublin summit to focus on growing Irish exports to Japan 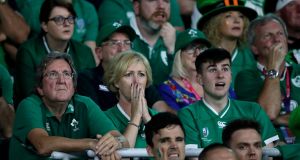 Irish rugby fans in Japan. Ireland being drawn in the same group as the host nation in the Rugby World Cup had “helped build awareness of Ireland”.

Opportunities for Irish exporters following the EU and Japan’s trade agreement will be the focus of a business summit at the Aviva Stadium in Dublin in November.

Keynote speakers at the Asia Matters summit will explore the potential for export growth following the Economic Partnership Agreement between the EU and Japan, which came into effect in February 2019.

Irish goods exported to Japan are valued at €3.3 billion, making the country the Republic’s third largest trade partner outside the EU.

“Negotiations between the EU and Japan may at times have appeared to have been protracted but you cannot underestimate the opportunities the trade deal provides for Irish firms targeting Japan,” said the summit’s executive director Martin Murray.

Mr Murray added that Ireland being drawn in the same group as the host nation in the Rugby World Cup had “helped build awareness of Ireland”. The summit takes place on November 21st and 22nd.

Long-hyped smart fridges will never run out of milk or data 12:02
State subsidises public sector retirees to cover gap until State pension 11:57
Trump holds America up as ‘example for the world’ 11:57
My father in a nursing home wants to gift me his house 11:23
Omagh manufacturer Naturelle to add 50 jobs in £4m expansion 10:50

1 Who are Ireland’s 17 billionaires?
2 State subsidises public sector retirees to cover gap until State pension
3 My father in a nursing home wants to gift me his house
4 Richer countries must do more to tackle climate change, Thunberg tells Davos
5 Nama lends Cosgraves €15m to fund huge apartment development
6 Health insurance: Switch often for your financial wellbeing
7 Are there annual limits on inheritances or gifts to a child?
8 Insolvency arrangement approved for man with €60 million in debts
9 Q&A: Why has the pension age question suddenly become an election issue?
10 Property firm sues engineering company over waterproofing of basement
Real news has value SUBSCRIBE