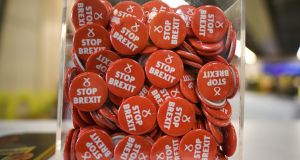 Image of the week: Scottish souvenirs

These “Stop Brexit” badges could be yours anywhere in the UK, but these ones happen to have been snapped in Aberdeen, Scotland, at the autumn conference of the Scottish National Party.

The SNP would very much like the UK to stay in the single market and customs union: party leader and Scottish first minister Nicola Sturgeon succinctly sums up Brexit as a “disaster”. Sturgeon’s party will be campaigning in the next UK general election on the right to hold another legally-bound referendum on Scottish independence next year, she announced, the hope being that the intervening years of Brexit-related shenanigans in London will have helped overturn the 55 per cent to 45 per cent vote cast in favour of the union in 2014. “The Westminster refusal is not sustainable,” says Sturgeon. “We can already see the cracks appearing.” Just a few, yes.

2,198% Rise in the value of funds overseen by the UK’s best-known fund manager Neil Woodford over a 25-year period after he joined Invesco in 1988. The FTSE All Share index rose 925 per cent over that same time.

£10.2 billion Peak sum invested in his flagship equity fund in 2017, three years after he went out on his own with Woodford Investment Management. Then things started to get complicated for the “star” stockpicker.

£3.1 billion Size now of the soon-to-be-wound-up Woodford Equity Income fund. This week, Woodford, apparently known by some as the Oracle of Oxford, was sacked as its manager.

Getting to know: Esther Duflo

Esther Duflo (46) is the youngest person to ever win the Sveriges Riksbank Prize in Economic Sciences in Memory of Alfred Nobel, which is the proper title for what most people refer to as the Nobel prize for economics.

Only the second woman to win the prize since it was first awarded in 1969, the Paris-raised Prof Duflo once told the Financial Times that she had been inspired “to do something useful for the world” by her mother, a paediatrician. Banerjee’s mother, meanwhile, is an economist in India.

Department store John Lewis has published its annual retail report on the latest shopping trends, and we can all learn a lot about ourselves from it. So what’s flying out the door?

1. Ecoware Everybody now owns at least one travel mug and reusable water bottle. But the cool kids have also switched to beeswax sandwich wraps.

2. Storage containers Does it spark joy? If not, then fling it in a box. It’s what decluttering guru Marie Kondo would want you to do.

3. Lego sets for adults You’re no one if you haven’t recreated the Central Perk set from sitcom Friends in the medium of colourful plastic bricks.

4. Flat caps and jumpsuits Specifically, flat caps as worn by Ireland’s own Cillian Murphy in Peaky Blinders and black jumpsuits as modelled by Phoebe Waller-Bridge in Fleabag, according to John Lewis.

5. Leopard print Sales of leopard-print clothing are up 333 per cent, the retailer said. That just might be related to the amount of store space its fashion concessions are allocating to the pattern.