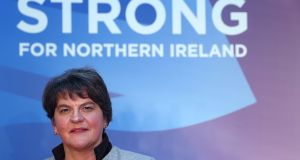 As a rule of thumb, whatever the DUP says is good, is bad economically, and whatever it says is bad tends to bring distinct economic advantages. If ever there was a party or a group that makes a lie of the old maxim “It’s the economy, stupid”, it’s the DUP.

From the start of this Brexit debacle, it has cosied up to a narrow section of British politics that is conspicuously ignorant and/or indifferent to the challenges faced by Northern Ireland and to its political sensitivities. Think of former Northern Ireland secretary Karen Bradley, who said none of the Troubles killings carried out by British soldiers were crimes.

To prove its Brexiteer credentials, the party secretly funded a high-profile wrap-around advert in the Metro newspaper – not published in Northern Ireland – following a donation from the little known pro-Brexit group called the Constitutional Research Council. Murky does not describe it.

And now it cries foul at the latest Brexit withdrawal agreement, which proposes dual-tariff arrangements for the North, keeping it in a customs territory with the UK but effectively also in the EU customs union.

The DUP says while the deal gets rid of the dreaded backstop and keeps the North within any future UK customs arrangements, it ties it into the EU customs union, on paper at least.

Can you think of a more advantageous arrangement from an economic standpoint? Essentially you have access to the UK market, which the rest of the EU has to leap over a fence to get to, while remaining free to trade unencumbered with the EU, the most valuable consumer market in the world. If that isn’t having your cake and eating it, what is? It breaks the integrity of the EU customs union, something Brussels would never have contemplated but for the threat to the peace process here.

Nonetheless the DUP rails against it, ignoring the majority of voters in the North who opposed Brexit, ditto the main business lobby, the Confederation of British Industry Northern Ireland and the Ulster Farmers’ Union.

As its temporary alliance with Westminster Brexiteers fractures, the party will learn an age-old political lesson – if you can be bought, you can be sold.