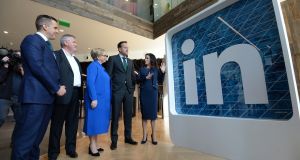 Taoiseach Leo Varadkar at the opening of LinkedIn’s EMEA head office in Dublin: while the tax rate was for many decades a vital support in attracting jobs to Ireland, this is no longer the case. Photograph: Dara Mac Donaill

The Irish policy of using a low corporation tax to compete for international business was first introduced in 1956 and, in different manifestations, it has played an important role in economic policy ever since. In the 1970s and 1980s it was vital in attracting many foreign multinational enterprises (MNEs) to Ireland.

Initially, this low rate of tax applied to firms operating in manufacturing. As a result of EU regulations, it was extended to cover the services sector in the late 1990s. Research suggests this extension of the low tax rate to services saw a significant loss of tax revenue from financial and retail companies, but this was more than offset by increased MNE activity in the services sector.

Today, Ireland’s corporation tax policy is under significant pressure, both from our EU colleagues and from the United States. While these remain threats, it is still important to assess how dependent our economy is on having a low corporation tax rate.

American tax law has, until recently, allowed US companies operating outside the country to defer indefinitely any US tax on profits earned abroad. Thus, US companies, by locating here, paid low taxes up front in Ireland, and their residual US tax liability was delayed for many years.

The position for MNEs of other countries, such as Germany, France or the UK, was different. The domestic tax code under which they operate means that the low Irish tax rate is of relatively little benefit to them.

This unusual US approach to taxing MNEs has meant US multinationals have had strong incentives over recent decades to move their mobile profits to Ireland, whereas such incentives are weak or non-existent for companies from other countries.

Recent developments where major US companies, such as Apple, have relocated their intellectual property (IP) to Ireland have added significantly to Irish corporation tax revenue. This revenue constitutes more than 4 per cent of our gross national income, with 80 per cent of it coming from MNEs, primarily US companies.

Transfer pricing allows MNEs to generate their profits where it is tax-effective to do so. However, IT companies such as Apple or Google, whose intellectual property is the source of virtually all their profits, are extreme examples.

By moving their IP, they can separate the location of their profits from where they employ their workers. Their taxes are paid where their IP is currently based. It follows that the jobs IT companies have had in Ireland for many years, prior to moving IP to Ireland in 2015 were actually not dependent on our low tax rates to be here. It is other features of our economy that keep them in Ireland.

Multinationals in other sectors, such as pharmaceuticals, have found it more difficult to separate employment from their IP-related profits. So the low corporation tax on all of their activity here remains a draw to these firms.

In overall terms, many MNEs who are here are not critically dependent on low corporate tax rates. While the tax rate was for many decades a vital support in attracting jobs to Ireland, this is no longer the case.

Perhaps only half the 60,000 jobs in US MNEs are so dependent. While that’s still a lot of high-paid jobs, other aspects of Irish competitiveness are much more important for future employment growth.

While a majority of jobs in foreign MNEs in Ireland are not directly vulnerable to changes in the US or EU tax environment, the indirect effects of such changes could still be very serious. That is because receipts from corporation tax are important in funding the government sector.

Just 10 companies pay 40 per cent of our corporation tax take, about 6 per cent of the total tax take. So, the implementation of the proposed EU Common Consolidated Corporate Tax Base could have quite negative effects, especially through the loss of tax revenue.

However, the reduced vulnerability of jobs to tax changes is to be welcomed, making Ireland less vulnerable to such external shocks.