John FitzGerald: Labour force data points to value of education in getting a job 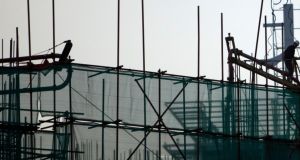 “If we are to build enough houses, employment in construction will have to increase substantially in the next few years.” Photograph: Nelson Ching/Bloomberg

The most reliable indicator of what is happening in the real economy is the data on employment and unemployment. The new Labour Force Survey, published by the Central Statistics Office this week, gives these figures for the third quarter of 2017, along with adjusted series for earlier years, taking into account changes in methodology from the previous publication.

In addition to changing from face-to-face interviews to a telephone survey, an adjustment has been made for the higher-than-expected population recorded in the 2016 census, which particularly affected the 20-24 age group. The CSO has done significant additional work, including collecting the data in the old way for one quarter, to derive consistent time series for key aggregates.

The adjusted series suggest that the economy is continuing to grow very rapidly. While the latest figures show an annual increase in employment of 2.2 per cent, that’s equivalent to a 4 per cent rise if the raw numbers employed are converted to a full-time-equivalent basis.

This reflects a big increase in average hours worked, something that has built up over recent quarters. That suggests an economy that is beginning to use up some of the spare capacity that resulted from the recession years.

The data adjustments made in moving to the new series have resulted in an upwards adjustment in the unemployment rate by about 0.4 of a percentage point. As a result, the latest series shows an unemployment rate for those aged 15-74 of 6.2 per cent at the end of 2017.

The latest data also revises upwards the number of women who are not recorded as unemployed but who would, potentially, be interested in a job.

While changing how we collect the data doesn’t affect the underlying steady fall in joblessness over time, the new data suggests we may have somewhat further to go before we reach full employment.

In turn this implies that it is less urgent for fiscal policy to tighten next year. This certainly does not mean there will be room for giveaways in Budget 2019, but the need for major tax increases to reduce demand pressures in the economy may be lessened.

The latest data also shows a rise in the participation rate in the labour force, especially concentrated in the older age cohorts. For those aged 25-64 the participation rate is at an all-time high of just under 80 per cent. It is also at an all-time high for those aged 60-64. With the progressive ageing of the population, this trend is to be welcomed.

Over the crisis years, labour force participation of under-30s fell as there was a big increase in participation in education, particularly at third level. This has not reversed as the economy has recovered.

If we are to build enough houses, employment in construction will have to increase substantially in the next few years

A welcome development has been the publication this week by the CSO, after much work, of consistent data back to the end of the 1990s on trends in employment in different sectors. The absence of such data had hampered our understanding of the effects of the financial crisis on the growth potential of the economy.

Administrative, professional and scientific services were particularly badly hit in 2008-2012, and suffered directly from the collapse in construction. Declining incomes and spending power delivered a significant drop in employment in the distribution sector over the same period. Industrial employment fell by 30 per cent at the trough, and remains significantly below its 2007 peak.

It is the IT sector, which has grown pretty continuously through the crisis years, that leads growth in employment.

The pattern of sectoral changes in employment over the recession saw jobs for non-graduates fall the most. By contrast, employment of graduates has risen fairly continuously since 2008, and continues to account for most of the growth in employment today.

It therefore makes a lot of sense, as the structure of the labour market has changed, that participation in third-level education rose during the recession years and remains high today.