Excess complexity of tender processes can undermine competition and savings 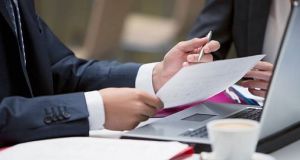 Preparing tenders can take a lot of time, and involve a lot of expense for firms. It must be worthwhile for firms to compete given that many times they won’t be awarded the job. Photograph: Getty Images

Over recent decades the purchase of goods and services by the State has been subject to increasing regulation to ensure that the State gets value for money and also that contracts are awarded on transparent criteria (such as minimum cost) rather than on friendship or party loyalty. This process of reform has been a gradual one.

In the early years of the State it was common for contracts by county councils to be awarded on a vote of councillors. Party loyalty was rewarded in a way that would be unacceptable today.

To prevent this practice power was transferred from councillors to county managers. However, up to at least the 1970s decisions on the purchase or renting of premises by the central government could still involve political direction.

Ireland was not unique in a lack of transparency in awarding public contracts. A common requirement across European countries was that contracts were awarded preferentially to domestic individuals or companies rather than to foreigners, even if domestic firms were much more expensive or less efficient. This substantially raised the cost of public services by reducing competition. In a small market, such as Ireland, this was important in raising costs.

However, the mirror image of the “buy national” policy was that firms in one country could not compete for business in other countries. For firms in a small country, such as Ireland, this proved a major disadvantage. In the 1980s, while Ireland had a burgeoning electronics sector, there was little activity in the related telecommunications equipment sector. That was because national telecoms companies sourced their equipment locally: in Germany from Siemens, in France from CIT-Alcatel, and so on.

One of the major reforms of the EU single market in 1992 was that it outlawed such discrimination. This opened up major opportunities for firms based in Ireland, opportunities which massively offset any losses by Irish firms.

Since 1992 we have seen major growth in the healthcare equipment, pharmaceuticals and business services sectors supplying to state-owned businesses across the EU, such as the UK’s National Health Service.

Today if a government contract is worth more than €135,000 it must be advertised so that firms from all over the EU can compete for the business. The rules governing the tender process ensure transparency and also that the state gets the best value for money. For contacts under €25,000 it is sufficient for the state to get three quotes – tenders are not necessary.

Allocating contracts in the EU on a competitive basis is now taken for granted but it marks a major step forward in producing an efficient and transparent public administration. It has greatly reduced the opportunity for corruption, and it has greatly enhanced the ability of the state to get value for money. It also ensures that firms in Ireland have an opportunity to compete for business across the EU market.

This transparent process is designed to enhance competition and to ensure that small firms can compete for business. However, while on paper the rules look very sensible, consideration must be given to the cost for firms, especially small firms, in preparing tenders for business worth close to €25,000.

Preparing tenders can take a lot of time, and involve a lot of expense for firms. It must be worthwhile for firms to compete given that many times they won’t be awarded the job. The cost of participating in several competitions can’t exceed the benefits of those they win.

If tender preparation costs are too high it can siphon a firm’s resources away from actually delivering satisfactorily on any tender that it wins.

In the case of low-value contracts, the call for tender must be very clear about the goods or services required, and the requirements for documentation should be simplified.

Too often public bodies specify complicated objectives for a contract, and require tenderers to carry out a disproportionate amount of work in preparing their bids.

It’s not only in small jobs that complexity and uncertainty pose a challenge for would-be bidders. This has also proved to be the case in the major contract for the State’s National Broadband Plan to deliver high-speed rural broadband, with first Siro and now Eir pulling out of the lengthy process, leaving only one bidder standing.

If competition is to reap the benefits for citizens and taxpayers it is intended to achieve, competitions need to be well-designed, as lean as possible and make sense for would-be bidders.

If there is no queue of suppliers there will be no savings for the State.