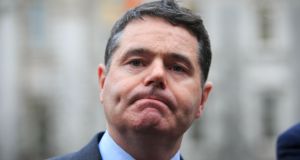 Paschal Donohoe: “My long-term view of the USC has always been to see its integration into the existing PRSI system”

The Cabinet on Tuesday approved the establishment of a working group of senior government officials to examine and make recommendations on the merger of USC and PRSI in advance of the October budget.

The officials, from the Departments of Finance, Taoiseach, Public Expenditure, Social Protection and the Revenue Commissioners, have been tasked with completing their report by the end of June, meaning their recommendations may form part of the budget later this year.

Minister for Finance Paschal Donohoe has previously indicated his intention to amalgamate the two taxes into a single social insurance tax, but said it would take between three and five budgets.

In a statement Mr Donohoe said: “My long-term view of the USC has always been to see its integration into the existing PRSI system. The work of this group will contribute to the Government’s objective of making incremental, sustainable but ambitious progress for our citizens – progress on fairer taxation and ultimately on better services”

Taoiseach Leo Varadkar previously raised the possibility of moving Ireland’s social insurance benefits to a continental-style system under which payments such as unemployment benefits would depend on contributions to the system.

This would mean, for example, that those on higher incomes who pay more in PRSI would see higher unemployment benefit payments for a period after they leave work. Mr Varadkar raised the suggestion during the Fine Gael leadership context – a move pitched in particular at the “squeezed middle” in the private sector.

While PRSI is a social insurance tax which is paid into the social insurance fund, USC is a payroll tax paid directly to the exchequer. It was introduced as an emergency measure during the financial crisis, and now raises €4 billion annually for the government.

Fine Gael promised to abolish the USC before the last election, though that pledge has now been shelved. Reductions in recent budgets have chipped a bit away at people’s USC bills, but the USC remains a significant imposition on incomes – and a significant revenue-raiser for the exchequer.

A spokeswoman for the Department of Finance stressed on Tuesday night that the amalgamation of the two taxes would be a lengthy and complex process. She pointed out that there were 11 classes and 24 sub-classes of PRSI.

Government will approach the process with considerable caution. According to the terms of reference approved by the Cabinet on Tuesday, the officials should have regard to “the need to preserve the tax base having regard to the need for certainty, equity, and ease of compliance and administration...current and future funding challenges facing the Social Insurance Fund...issues likely to arise from a phased implementation over a number of years of the new instrument...and simplification of the personal tax and social insurance systems”.