BoE’s rate-setters voted 9-0 to hold bank rate at 0.5 per cent, as expected by analysts 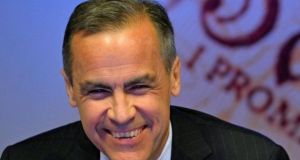 The Bank of England said on Thursday interest rates probably need to rise sooner and by a bit more than it thought three months ago, after it raised its growth forecasts for Britain due to the strong global recovery.

The BoE’s rate-setters voted 9-0 to hold Bank Rate at 0.5 per cent, as expected in a Reuters poll, giving them time to assess how the world’s sixth-biggest economy copes with the approach of Brexit.

But governor Mark Carney and colleagues said they now wanted to return inflation to its 2 per cent target over “a more conventional horizon”, in a sign they were turning their sights to tackling price growth over two years rather than three.

“Inflation is expected to remain close to recent rates in the short term, slightly higher than the projection made three months ago, largely as a consequence of recent higher oil prices,” Mr Carney said in a news conference after the decision.

“It’s possible that inflation could rise back above 3 per cent temporarily in the short term.”

Sterling rose by more than a cent against the dollar after the announcement, reversing its recent declines, while British government bond prices fell and share prices slipped. Rate futures were pricing in a more than 50 per cent chance of a rate hike in May with an increase fully priced in for August.

“It is no surprise to see interest rates being kept on hold this month. But it is still likely that we will see at least one quarter point rise in 2018 and possibly two or three,” said PwC senior economic adviser Andrew Sentance, a former BoE rate-setter.

The Monetary Policy Committee raised interest rates for the first time in a decade in November and said on Thursday that it now thought the next hike needed to come a bit more quickly than it thought then.

Before Thursday’s statement, investors saw a nearly 50-50 chance of the next hike coming in May, when the BoE is due to update its economic forecasts again, and this new message is likely to increase bets on a move then.

“Were the economy to evolve broadly in line with the February Inflation Report projections, monetary policy would need to be tightened somewhat earlier and by a somewhat greater extent over the forecast period than anticipated at the time of the November Report,” the MPC said.

Britain’s economy has slowed since the 2016 Brexit vote but it has fared better than many investors expected at the time of the referendum, thanks largely to the much stronger global rebound in countries such as the United States, Germany and other key trading partners.

The BoE has stuck to its plan to raise rates gradually, and before Thursday’s announcement financial markets were expecting Bank Rate to hit 1.2 per cent by early 2021, the BoE noted, something that would suggest two or three rate hikes by then.

However that scenario would still leave inflation above its 2 per cent target in three years’ time, the BoE said, suggesting it might hikes rates by more than investors have been expecting recently.

In November, the BoE signalled it expected two hikes over the following three years. Peter Dixon, an economist with Commerzbank, said the central bank wanted to put markets on notice that further rate hikes were on the way, but he was not yet sure the case was clear enough for a move.

“We have yet to see evidence to support the view that we need more aggressive forward tightening than we thought three months ago,” he said.

On Thursday, the BoE nudged up its economic growth forecasts for Britain to show an average annual expansion of 1.75 per cent over the next three years.

That was a lot weaker than its expectation of global growth of nearly 4 per cent over the same period and was also below the country’s pre-financial crisis average of about 2.9 per cent.

The BoE linked the sluggish British outlook to slower growth in the labour force, due to fewer immigrants coming to Britain after Brexit and to the country’s ageing population. But even with slower growth, Britain remained susceptible to excessive inflation.

The BoE said it expected the economy could only grow by 1.5 per cent a year before it started to generate too much price pressure. Annual wage growth is expected to pick up to 3 per cent by the end of 2018, in line with previous forecasts.

The BoE lowered most of its inflation projections after sterling rose recently and bond yields in financial markets jumped. But inflation was expected to remain above the 2 per cent target at 2.11 per cent in three years’ time.

Mr Carney said last month that Britain’s chances of catching up with its faster-growing peers depended largely on progress in the Brexit negotiations between London and Brussels.

On Thursday, he said: “The economic outlook will continue to evolve. There will be ups and downs in financial markets. The Brexit process will twist and turn before it is concluded.”

Prime minister Theresa May wants to clinch a transition deal next month to secure full access for Britain to EU markets for about two years after it leaves the bloc in March 2019.

Some economists have said that the BoE has a narrow window to raise rates because later in the year, London and Brussels could be wrangling over their long-term relationship, weighing on the economy and possibly preventing the bank from moving.

1 Who are Ireland’s 17 billionaires?
2 Why has the pension age question suddenly become an election issue?
3 Restoring pension age to 65 would cost €620m a year, claims FF
4 Ireland has fifth-largest number of billionaires per capita in the world, says Oxfam
5 Property firm sues engineering company over waterproofing of basement
6 Davos 2020: What to watch for at this year’s global gathering
7 Chris Johns: Ireland risks populist culture war over property and pensions
8 Boeing’s 737 Max will fly again in 2020, Avolon predicts
9 Why Irish savers should forget about banks
10 Apple played key role in making ‘Ireland tech capital of Europe’
Real news has value SUBSCRIBE