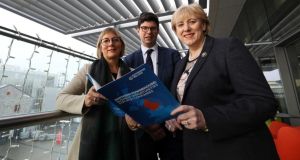 Even with the threat of Brexit on the horizon there are “opportunities in the UK which are untapped from an Irish perspective”, Enterprise Ireland has said.

The State agency, which helps Irish businesses deliver export sales, noted that growth in the north of England was faster than any other region in the UK and offers considerable opportunity for Irish export businesses.

Speaking at the launch of the agency’s report Northern Powerhouse: Business Opportunities for Irish Companies, Enterprise Ireland chief executive Julie Sinnamon said that while the agency was focused on encouraging businesses to have a more diversified market strategy, “the UK is Ireland’s most significant export market”.

The report highlights opportunities for Irish businesses across a range of sectors including the construction of 500,000 new homes, the development of new life-sciences and healthcare facilities, the supply of engineering products and major rail and road developments including the HS2 railway connecting the north of England with London.

Northern Powerhouse is an initiative by the UK government to rebalance the country’s economy. James Stewart, a director of KPMG’s global infrastructure practice, suggested the plan was politically necessary to address economic disparities in the north of England compared with other regions. “I can’t think of another country of similar size to the UK that relies on one economic centre,” he said.

Brian Crowley, the chief executive of TTM Healthcare, a global healthcare recruitment company based in Ennis, Co Clare, with a significant UK presence, said that when he opened a UK arm of the business he initially chose London. “If I was to do it again I’d probably choose the north of England first,” he told Enterprise Ireland client companies at the event.

At least 105,000 people are directly employed in the UK by Irish companies. The Minister for Business, Enterprise and Innovation, Heather Humphreys, suggested that as Brexit negotiations continued the UK would remain the largest export market for Irish businesses. “The Irish Government and our export agency Enterprise Ireland are committed to consolidating and growing Irish exports to the UK now and into the future,” she said.

“[The] Northern Powerhouse report underscores the extent of the business and partnership opportunities for Irish companies, with the north of England, an area that is growing at a significant rate and outpacing all other parts of the UK,” Ms Humphreys added.

Marina Donohoe, Enterprise Ireland’s UK and Northern Europe director, told The Irish Times the UK option was attractive to a number of companies who were not necessarily in a position to sell into the wider European market.

“Notwithstanding the threat of Brexit, [the UK] economy is in growth mode and it’s on our doorstep,” Ms Donohoe said before highlighting that it was still encouraging clients to reduce their dependency on the UK and to diversify as they scale and grow.

Enterprise Ireland is planning a trade mission to the north of England in April in an effort to strengthen the presence of its client companies in the region.