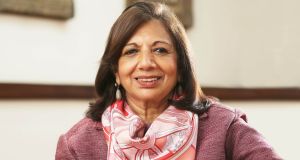 One of the world’s leading entrepreneurs has attributed a large part of her success to the early break she got in Ireland and to the progressive management style she learned working with Irish businesspeople.

Dr Kiran Mazumdar-Shaw, an Indian billionaire who is chairwoman and managing director of the biotech company Biocon, was speaking ahead of a fireside chat at EY’s Entrepreneur of the Year “CEO Retreat” on Tuesday.

The entrepreneur, who got her start in the business world after establishing a joint venture with Cork-based company Biocon Biochemicals, also said she hoped to see trade links improving between India and Ireland in the years ahead.

Dr Mazumdar-Shaw was named the EY World Entrepreneur of the Year in June, beating 46 other country finalists, including the Irish winner Richard Kennedy of Devenish.

Biocon, which has evolved from manufacturing pharmaceuticals such as statins and immunosuppressants to discovering, developing and producing biologics to treat chronic diseases such as diabetes, began as a joint venture in 1978 after Les Auchincloss, who led the Cork-based company, convinced Dr Mazumdar-Shaw to set up a business in India to supply it with enzymes. The two had met through mutual contacts in Australia.

Biocon, which employs nearly 10,000 people globally, recorded revenues of $920 million (€786 million) last year and Dr Mazumdar-Shaw has been recognised globally, appearing on the Forbes 100 most powerful women list and Time Magazine’s 100 most influential people in the world list.

The entrepreneur said that much of what she learned in business was learned during her early years.

“I owe my entrepreneurial style to Ireland for the simple reason that when I started it was an accidental encounter with Les who told me that I should set up a business. I thought he was crazy because I didn’t have any business skills, had no money and was a 25-year-old woman in India, a country that did not accept women in business. But he convinced me to do it and came to Ireland for a while and really learned a lot,” she said.

“One of the key things was the idea of delegating responsibilities, rather than micromanaging, which was new to me because most of the business world was still very much focused on this hierarchical style in which you were told what to do. So it was very refreshing and challenged me to take risks, which is of course critical in business,” she added.

Dr Mazumdar-Shaw has maintained close links with Ireland and serves as consul at the Irish consulate in Bangalore. She was also a founding board member of Science Foundation Ireland. Meanwhile, former tánaiste Mary Harney is a board member of Biocon.

She said she had been hugely impressed by the high level of entrepreneurship locally.

“The opportunities that lie in entrepreneurial ventures between Ireland and India are huge and in the past have benefitted both countries. I would like to see trade between us increase even more in the years ahead and for us to innovate together,” she said.