Appeal would mean €14.3bn would remain in escrow account for duration of the case 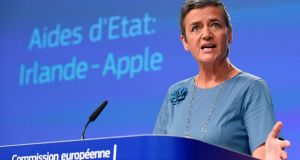 EU competition commissioner Margrethe Vestager previously did not appeal another ruling annulling her decision ordering the Netherlands to recover between €20m and €30m in tax benefits for Starbucks. File photograph: Getty

European Union competition commissioner Margrethe Vestager is reported to be leaning towards lodging an appeal against a court decision that quashed her finding four years ago that Apple received €13.1 billon of illegal State aid from the Republic.

Politico Europe has cited sources as saying the EU will likely submit an appeal to the EU General Court ruling from July by a deadline of just before midnight on Friday.

It is understood no decision has yet been taken on the matter. A spokeswoman declined to comment on Tuesday.

The general court ruled in July that the commission, which began looking into Apple’s Irish tax affairs in 2013, “did not succeed in showing the requisite legal standard that there was an advantage” that flew in the face of EU law when it decided in August 2016 that Apple had received tax aid from Revenue in the Republic.

If the commission does not lodge an appeal by Friday, September 25th, the Government will move quickly to start returning the money, which totalled €14.3 billion when interest was included and has been sitting in escrow since 2018, to Apple. The escrow funds are mainly held by way of bonds, rather than cash.

An appeal would mean the money would remain in escrow for the duration of the case, which could take a further two years.

Politico said lawyers see the commission’s appeal chances as slim, in part because the Court of Justice of the EU only hears points of law, and a large part of the general court’s reasoning was based on facts.

Ms Vestager previously did not appeal another ruling annulling her decision ordering the Netherlands to recover between €20 million and €30 million in tax benefits for Starbucks, it noted.