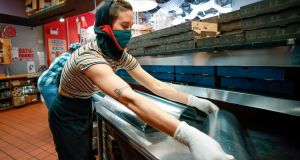 There were 860,000 new applications for jobless aid on a seasonally adjusted basis for the week ending September 12th, compared with 893,000 the previous week, the US Department of Labor said on Thursday

First-time claims for unemployment aid in the US resumed their gradual decline, signalling uneven improvement in the labour market as the nation continues to grapple with the coronavirus pandemic and uncertainty about additional fiscal support.

There were 860,000 new applications for jobless aid on a seasonally adjusted basis for the week ending September 12th, compared with 893,000 the previous week, the Department of Labor said on Thursday. Economists had forecast 850,000 claims.

The federal Pandemic Unemployment Assistance programme, which extends aid to the self-employed or those who would not qualify for regular unemployment compensation, had 658,737 new claims on an unadjusted basis. That was down from 868,314 the previous week.

The report showed the number of Americans actively collecting state jobless aid slipped, with continuing claims down to 12.63m, from 13.5m for the week that ended September 5. Economists had expected a dip to 13m.

That sent the so-called insured unemployment rate, considered an alternative measure of joblessness, to 8.6 per cent, from 9.3 per cent a week earlier.

Roughly half the 22m jobs that were lost in March and April have been recovered as coronavirus lockdowns eased and businesses brought back furloughed workers or Americans found new work. While the unemployment rate slid to 8.4 per cent in August, the Federal Reserve on Wednesday said it did not expect that figure to return to pre-pandemic levels until 2023.

At its latest monetary policy meeting, the Fed signalled it would leave interest rates at rock-bottom levels until at least the end of 2023 as policymakers sought to reinforce their support for the economy.

While the US economy has thus far recovered faster than the Fed expected, uncertainty about a Covid-19 vaccine and fading hopes of additional stimulus before the November presidential election have clouded the economic outlook. Moreover, economists worry the initial rebound since the end of coronavirus lockdown restrictions has run its course.

The Fed now expects US GDP to contract 3.7 per cent this year, better than its previous estimate for a 6.5 per cent decline, although Fed chair Jay Powell cautioned that this forecast assumes further fiscal support. Economists have warned the tentative rebound will stall later this year or early next year in the absence of fresh fiscal stimulus. – Copyright The Financial Times Limited 2020