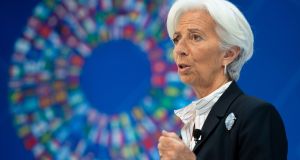 The “Lagarde effect” on the markets was quick and dramatic. Longer-term interest rates – for which the benchmark is borrowing costs on government bonds – dropped sharply as markets reacted to Christine Lagarde’s nomination as European Central Bank president. Markets had worried that a monetary hawk, such as Germany’s Jens Weidmann, might get the job and try to pull back on recent promises by outgoing president Mario Draghi to act if necessary to revive inflation. Lagarde is seen as likely to follow the Draghi line. Long-term rates tumbled across Europe, and Irish 10-year bond yields fell to a record low of 0.066 per cent.

The job for Lagarde – if finally appointed – will be to do what is necessary, without being seen to be in the pockets of the European politicians. Lagarde was herself a politician, serving as French finance minister and running into some controversy when found guilty of negligence in relation to a payment to businessman Bernard Tapie, though the court did not punish her.

The International Monetary Fund, where she has been managing director since 2011, stood by her after the verdict and she is seen to have revived its reputation. Her lack of economic training and financial markets experience have raised questions as she heads to Frankfurt. Philip Lane, recently appointed as ECB chief economist after a spell heading the Irish Central Bank, will be a key adviser.

Unless the indicators improve, Draghi is expected to propose action before he leaves at the end of October. Lagarde will then have to run with the ball as the ECB moves further into uncharted policy waters. And Lagarde may step up Draghi’s calls to Europe’s politicians – particularly in surplus countries like Germany – to do more via fiscal policy and not leave all the work to the ECB.

She may also face wider political challenges, with US president Donald Trump yesterday accusing Europe of currency manipulation and acting to weaken the euro – saying the US must respond. If a threatened trade war is added to by a currency war – where big players are all trying to weaken their own exchange rate in a series of competitive devaluations – then we will really be heading into uncharted waters, at least in modern times.