Brexit is detrimental for economy ‘whatever form it takes’, says Minister for Finance 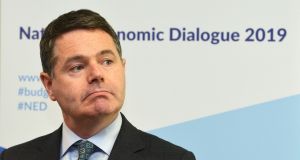 Minister for Finance: “If there is a disorderly Brexit... there will be significant pressure placed on the public finances.”

A disorderly Brexit could result in a €6 billion hit to the exchequer, Minister for Finance Paschal Donohoe has warned.

“If, as appears increasingly possible, there is a disorderly Brexit, there will be significant pressure placed on the public finances,” Mr Donohoe told the Oireachtas Budgetary Oversight Committee.

He said a no-deal, crash-out Brexit could involve a headline budget deficit of between 0.5 and 1.5 per cent for 2020, rather than the 0.4 per cent surplus currently forecast.

“This amounts to a negative swing in the headline balance of up to €6 billion,” he said.

In his recent summer economic statement, Mr Donohoe set out a twin-track approach to the UK’s EU divorce. In the event of an orderly outcome, the Government plans to run a budget surplus of 0.4 per cent. If a no-deal Brexit happens, the budget will be allowed to move into a deficit, effectively cushioning the economy from the likely trade shock.

Mr Donohoe did not rule out additional “temporary” Brexit measures to support the sectors and regions most affected albeit without specifying what form these would take.

“The United Kingdom’s exit from the European Union will have a detrimental impact on our economy and public finances whatever form it ultimately takes,” he said.

“But the magnitude of that impact depends upon how disorderly that exit is. There is no precedent in modern economic history for an event like Brexit, and, as such, predicting its impact precisely is difficult,” Mr Donohoe said.

He said the Government would be in a better position to make a decision on which budgetary scenario to take in September.

The UK will have a new leader by then and his Brexit objective will be clearer, he said.