Banks still dangerously exposed to risk of another crisis 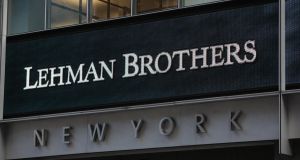 The cohort of young adults starting university this month to begin studying finance and economics will almost certainly not know the difference between a solvency crisis and a liquidity crisis. That’s because most of them were only eight or nine years old when a presenter on RTÉ’s Prime Time (I’m pretty sure it was Miriam O’Callaghan) asked an expert guest this very question. That, more than any other, was the slightly surreal moment when I realised we were in serious trouble.

Something had gone seriously wrong when everyday conversation included discussions of subordinated bank debt and whether or not bondholders should be ranked pari-passu with bank deposits. Life is far too short for otherwise sensible people to get involved in the financial plumbing of the banking system. Just as we have no need to know much about the technical details of the sewerage system flowing beneath our feet, we should not have to be exposed to what bankers do every day.

That liquidity and solvency question was on the money. It was the right one to ask but almost impossible to get both a comprehensible and comprehensive answer. Banking crises – there have been many throughout history and there will be more – always have elements of both. Lehman Brothers went bust a couple of weeks before the Irish government issued its blanket bank guarantee. It is easy, therefore, to conclude that it must have been insolvent. Except that it possibly was not, or at least not as bust as was previously thought. According to some reports, many Lehman creditors have received at least part of the money owed to them.

There is still a huge debate over whether or not it was right to let Lehman go in the first place: this goes to the heart of the insolvency/liquidity debate. If Lehman was merely illiquid, as many people claim, it was probably a mistake to let it go.

Several Irish politicians have laid the blame for our own banking crisis firmly at Lehman’s door. It’s probably fair to say that the bankruptcy of a large global investment bank made our own difficulties worse. But it’s a stretch to say that it caused them. We managed to mess up all by ourselves.

But we were not the only messers in the room. The best primer for the global financial crisis remains Michael Lewis’s The Big Short (either the movie or the book). Lewis tells the story brilliantly. He explains how and why so few people saw it coming and, even when they did, how they nearly went bust themselves. One abiding lesson of financial crises is that they are always difficult to predict and near to impossible to get the timing right. To paraphrase Keynes: banks can stay insolvent for longer than you can.

We know all about crazy bank lending practices and the failures of regulators. But there were also genuine mistakes made by people who were just wrong

Not enough is made of the psychological dimensions of the crisis. We know all about crazy bank lending practices and the failures of regulators. There were bad decisions driven by perverse incentives. But there were also genuine mistakes made by people who were just wrong: no malice, no criminality, just a wrong view of the world. I recall an informal conversation with a senior bank executive not long after the guarantee. By this time everyone was warning about property prices and what they could do to bank solvency. He was convinced that forecasts of a property implosion were wrong: he agreed that prices could fall but he argued they would do so gradually. He also took the view that his own bank would be protected because “we have only lent to the biggest and soundest borrowers”.

With the benefit of 10 years of hindsight we can chuckle at how wrong he was. But that’s all he was. Hyman Minsky, a much-neglected economist, warned about the psychology of the business cycle. His concerns focused on what happens next after a prolonged period of stability: people fall into the trap of believing that calm will persist indefinitely. In a sense, stability becomes a kind of bubble itself. Policymakers and regulators need to be alert to this just as much as they need to keep watch on obviously dodgy lending.

The consequences of the crisis are still debated. Some are surprising: it is claimed, for instance, that 4.8 million fewer babies than expected were born in the United States. Brexit and Trump are two events thought to have been driven in part by the crash. We are all (most of us anyway) poorer because of the crisis.

Inevitably, we ask if it could happen again. The answer is a resounding yes, mostly because banks have successfully resisted global regulatory attempts to make them safe. They have been made safer, but not safe. If banks have enough capital they are unlikely to become insolvent during bad times. But bank capital is one of those things that normal human beings find impossible to have any interest in. Even bank chief executives get confused: I recall when the Irish banks issued preference shares during the crisis, one senior executive being asked if they were “loss bearing” (a critical aspect of bank capital). He didn’t know the answer. What chance do mere mortals have? Banks should be forced to have more capital. Only when that is done will be safe. And we are nowhere near that point yet.