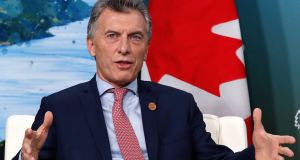 Argentina’s president, Mauricio Macri. The country has established a trading band for the peso between 34 and 44 per US dollar. Photograph: Yves Herman

Argentina was set on Monday to launch a new currency band under a revised International Monetary Fund deal aimed at halting a more than 50 per cent drop in the local peso so far in 2018.

Under the $57 billion standby financing agreement, Argentina has established a trading band for the peso between 34 and 44 per US dollar. The currency has been at the centre of emerging market volatility this year. It lost 3.87 per cent on Friday alone to close at 41.3 per greenback.

The question ahead of the market open was whether the peso would weaken enough to test the 44 per dollar limit. The central bank is expected to intervene in the foreign exchange market to support the currency if the 44 per dollar threshold is broken.

The bank has spent almost $16 billion in interventions so far this year.

“Whenever a new program is implemented there’s a period of transition and adaptation by the market, until it gets used to the new rules and signals given by the central bank,” the central bank’s new chief, Guido Sandleris, said in an interview published by local daily La Nacion on Sunday. – Reuters