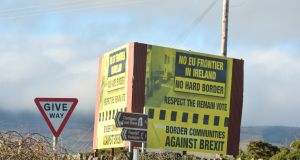 EU/Brexit campaign sign north of the Border: concern at Irish economic prospects is being prompted by rising unease about Brexit. Photograph: Artur Widak

Rising energy and housing costs also hurt sentiment toward household finances, according to the latest consumer sentiment index from KBC Bank Ireland and the Economic and Social Research Institute (ESRI).

Some households are likely feeling a “sense of remoteness” from the reported return to better economic times, regarding themselves as worse-off as a result, said Austin Hughes, KBC Bank Ireland’s chief economist.

Although the index fell to its lowest level since December 2016 and posted its steepest monthly decline in four years last month, Mr Hughes said consumers were more nervous than “negative”, with sentiment “by no means sour” at the moment.

“Our sense is that this re-assessment of Irish economic prospects is largely prompted by increased nervousness about Brexit,” he said.

“From a consumer perspective, the most worrisome aspect is the tension between a shortening timeframe and repeated setbacks around the negotiations, which imply a notably increased threat that a workable, damage-minimising agreement will not be reached.”

But while Brexit constitutes a troubling “known unknown”, the September sentiment survey suggests Irish consumers are also grappling with “known knowns” in the shape of strains on their household finances, according to Mr Hughes.

For the first time since December 2016, a larger share of consumers (23 per cent) felt their financial circumstances had worsened over the previous year than felt they had improved (21 per cent).

Mr Hughes said this negative assessment of household finances likely related to price increases for rents, light and heating, while low expectations of any benefit to personal finances from Budget 2019 also contributed.