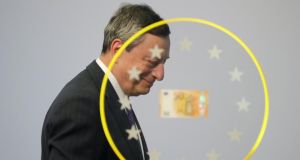 Mario Draghi has said that inflation in the euro zone isn’t yet strong enough to justify changing the outlook for monetary policy.

“I do not see cause to deviate from the indications we have been consistently providing in the introductory statement to our press conferences,” the president of the European Central Bank said in a speech in Frankfurt on Thursday. “It is clear that continued support for demand remains key.”

With the region’s upturn gaining momentum and the threat of deflation off the table, ECB policymakers have been sending diverging signals about the strategy to exit their unprecedented stimulus campaign. Although current guidance foresees a significant pause between the close of asset purchases – currently scheduled for the end 2017 – and rate hikes, some governors have voiced support for an acceleration or even a change in the sequence.

Investor expectations that the ECB could raise the cost of borrowing as early as January 2018 had increased after Mr Draghi’s March 9th press conference, before subsequently falling after a series of speeches by policymakers reaffirmed the status quo.

“Our forward guidance is de facto on the entire package, not on any specific component of it,” Mr Draghi said. “This guidance relates not just to the conditions under which we would withdraw stimulus – ie the sustained adjustment in the path of inflation – but also to the sequence of measures we would use to do so.”