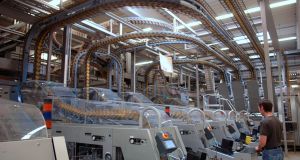 Germany’s economy expanded at the fastest pace in five years in 2016. Photograph: iStock

German factory orders rebounded from their steepest decline in eight years in a sign the recovery in Europe’s largest economy remains intact.

Orders, adjusted for seasonal swings and inflation, rose 3.4 per cent in February, after slumping a revised 6.8 per cent in January, data from the Economy Ministry in Berlin showed on Thursday. The typically volatile reading compares with a median estimate for a 4 per cent gain in a Bloomberg survey. Orders were up 4.6 per cent from a year earlier, when adjusted for working days.

Germany’s economy expanded at the fastest pace in five years in 2016 and recent data show that trend is set to continue with private-sector output accelerating, unemployment falling to a record low and business confidence at the highest since 2011. Even so, risks including September’s federal elections, Brexit and uncertainty over US trade policies continue to hang over the outlook for spending and investment.

The rebound was led by a 8.1 per cent jump in domestic demand, while export orders were unchanged from January. Intermediate-goods orders surged 8.5 per cent in February, while demand for investment goods rose 0.3 per cent and that for consumer goods increased 2.7 per cent, the ministry said.

“Manufacturing orders recovered after a sharp decline at the start of the year,” the ministry said in an e-mailed statement. “Order intake was lower than in the very strong fourth quarter, which was characterised by bulk orders. However, the volume of orders as well as the business climate in the manufacturing sector rose” and “a slight upturn in manufacturing is to be expected,” the ministry said.