Jean-Claude Juncker ‘would not mind’ a German leading the ECB 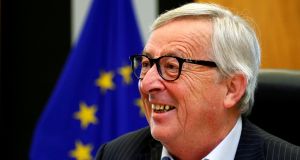 Jean-Claude Juncker has said he “would not mind” a German becoming head of the European Central Bank, in a sign that the European Commission president would support the candidacy of Bundesbank chief Jens Weidmann for the top job in European economic officialdom.

Mr Juncker told Handelsblatt, a German business daily, that a German could take on the top job at either the commission or the ECB.

“Weidmann is a convinced European and an experienced central banker and therefore suitable,” Mr Juncker said. “I do not explicitly plead for him, but I am not against him either. I strongly disagree with the opinion held in parts of southern Europe that a German cannot become ECB president.”

Both the commission and ECB jobs become vacant later this year, with European leaders set to pick successors to Mr Juncker and current ECB chief Mario Draghi after this month’s European parliamentary elections.

German MEP Manfred Weber is campaigning for the commission role, which both Paris and Berlin would prefer to secure for one of their nationals over the ECB job. But with Mr Weber at risk of losing out to Michel Barnier, the EU’s chief negotiator on Brexit, Berlin has begun pushing for Mr Weidmann to fill the other role.

The Bundesbank president’s candidacy is controversial however due to his extreme hawkishness – he was the only policymaker to object to Mr Draghi’s pledge to do “whatever it takes” to keep the single currency together, including buying bonds in potentially unlimited quantities.

His attitude, characterised by Mr Draghi as “nein zu allem” - or “no to everything” - has placed him at the margins of the ECB governing council, which relies on consensus to come to decisions.

Mr Juncker believed other’s concerns that an ECB headed by Mr Weidmann would not offer enough monetary support to the euro zone economy were overplayed.

“I like Jens Weidmann. However, he could not change the monetary policy of the ECB as president. Because it is not the president alone, but the central bank council [that sets monetary policy].”

1 Who are Ireland’s 17 billionaires?
2 My father in a nursing home wants to gift me his house
3 State subsidises public sector retirees to cover gap until State pension
4 Are there annual limits on inheritances or gifts to a child?
5 Swiss police suspect Davos plumbers of being Russian spies
6 Corporate tax change is inevitable, says Donohoe
7 O’Flynn says subsidiary ‘mistakenly ’ sought permission for student apartments in Birmingham
8 Property firm sues engineering company over waterproofing of basement
9 Insolvency arrangement approved for man with €60 million in debts
10 Help, I’ve no PRSI stamps – can I still get a pension?
Real news has value SUBSCRIBE