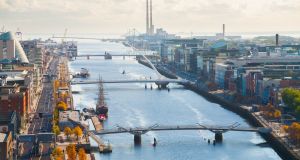 Dublin has raised its economic growth forecasts for 2017 and 2018 due to the muted initial impact of the Brexit vote. Photograph: iStock

The Investec Purchasing Managers’ index slipped to 54.4 in October from 55.4 in September, holding above the 50 mark separating growth from contraction for the 53rd month in a row.

Although Ireland is seen as the European Union country most exposed to Britain’s decision to leave the bloc, Dublin has raised its economic growth forecasts for 2017 and 2018 due to the muted initial impact of the Brexit vote.

New orders slipped to a three-month low but new export orders were at a four-month high in October, with the authors pointing to increased demand from European countries.

The forward-looking Future Output subindex increased to an eight-month high of 74.4, with more than 50 percent of respondents predicting a rise in output compared with just 3 percent predicting a contraction.

The managers cited improved demand both at home and in export markets for their optimism.

“Given the positive outlook for the Irish and wider global economies, we view this bullishness as well-found,” Investec Ireland chief economist Philip O‘Sullivan said.

1 Pre-flight Covid tests possible ‘within days’ if given go-ahead – airports
2 Johnny Ronan loses out on €315m Dublin docklands deal
3 City businesses can’t afford to wait for a Covid-19 vaccine
4 Ryanair and Aer Lingus to cut further flights from regional airports
5 How long can Government afford to keep State pension age at 66?
6 Bank of Ireland takes €169m charge for 1,700 job cuts
7 Liquidators appointed to Irish arm of Wirecard
8 Meath site primed for delivery of enterprise and employment
9 How much state pension will I get next year?
10 Tesco takes to the skies with home delivery by drone
Real news has value SUBSCRIBE