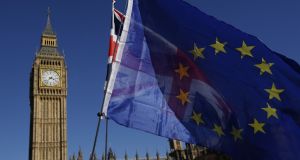 The UK’s decision to leave the European Union is cutting disposable income by more than £600 per household, according to the National Institute of Economic and Social Research. Photograph: Luke MacGregor/Bloomberg

The UK’s decision to leave the European Union is cutting disposable income by more than £600 per household, according to the National Institute of Economic and Social Research.

The pound’s tumble since the referendum has pushed inflation significantly higher, Niesr said, while Brexit has also negatively affected investment and productivity, increased uncertainty for businesses and damaged growth.

In a report unveiling its latest forecasts for the UK on Wednesday, Niesr’s Garry Young said: “Had sterling not depreciated and the economy continued to grow at its previous rate, as would have been likely with an improving global backdrop, real household disposable income per head might have been more than 2 per cent higher than now, worth over £600 pounds per annum to the average household.”

The report also noted that higher living costs associated with Brexit are likely to weigh more heavily on the unemployed, pensioners and single-parent households. Separate research showed that the consequences of the decision to leave the EU are likely to be more damaging to areas around London, which primarily voted Remain, than to more pro-Leave areas.