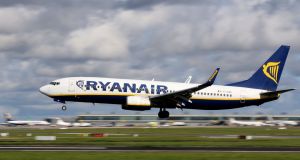 Ryanair is still flying high, despite some recent turbulence, with its first half profits advancing by 11 per cent to €1.3 billion. Photograph: Paul Faith/AFP/Getty Images

Ryanair is still flying high, despite some recent turbulence, with its first half profits advancing by 11 per cent to €1.3 billion. Barry O’Halloran has the details.

Meanwhile it seems there is such a thing as bad publicity, despite what the marketing gurus may say. Ryanair’s brand image nosedived after cancellation crisis, according to a new Core Media study. Laura Slattery reports.

The Government is tying up the loose threads from Budget 2018. Earlier this week it extended the Benefit in Kind scheme for electric vehicles and now it has sought to clarify how commercial property buyers who agreed to buy a property before October 11th can avail of the old lower rate of stamp duty. Fiona Reddan has the details.

Given the damage wrought by Ophelia it may seem pretty logical to conclude the Irish insurance sector will be hit this year, but a review by Standard & Poor’s says future sector profitability is likely to remain constrained by a number of factors, including the increase in court awards and structural changes.

Gauging economic sentiment can be a pseudoscience, and you can take your pick from a raft of survey results this week. It seems there was no ‘budget bounce’ in the Republic, while in the North political uncertainty and Brexit has hit consumer sentiment. Yet taking the wider euro zone area into account the news is much brighter: consumer confidence has surged to a 17-year high.

In her media column this week Laura says Dublin’s music radio market is most exposed to industry changing habits of younger, urban listeners point to future shifts in audio consumption.

As many are learning to their cost, the State pension qualification system is full of quirks. In personal finance this week Fiona Reddan trying to untangle some of the issues faced by those who, perhaps, worked abroad or were a stay-at-home parent.

Finally, back to the Budget and the Government’s new tax plan for employee share options was dead on arrival, argues entrepreneur and venture capitalist Brian Caulfield. He outlines how the new scheme aimed at helping start-ups retain key employees, has several fundamental problems, “while some of the restrictions are staggeringly inept”.