What does the latest ECB move mean for interest rates?

Despite cut to economic stimulus, any rise in the ECB rate is unlikely until 2019 at earliest 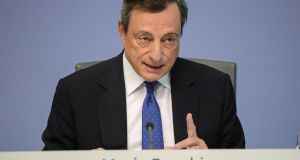 The ECB is moving to end its extraordinary period of monetary stimulus, but only slowly. The bottom line for borrowers from the latest announcement is that it now looks like the first move upwards in official ECB interest rates will not come until 2019 at the earliest. How quickly interest rates will rise after that will depend on how strongly the euro zone is growing.

The ECB announced today that its programme of massive buying of government and corporate bonds – so-called quantitative easing – would be cut from €60 billion a month now to €30 billion next January.

The programme has been extended to September 2018 and the ECB has made clear that it could run beyond that, depending on economic conditions in the meantime. Growth has picked up in the euro zone but the rate of inflation remains well below the ECB’s target of 2 per cent, so the central bank is moving slowly. A German-led group at the ECB believes this should mean an early end to quantitative easing, but a majority of the bank’s governing council felt otherwise.

Crucially for borrowers, the ECB has now said that it expects interest rates “to remain at their present levels for an extended period of time” and does not expect them to start rising until “well past the end” of the quantitative easing programme.

ECB president Mario Draghi suggested at his press conference on Thursday that quantitative easing is unlikely to end “suddenly” after September 2018, meaning it could be phased out over a longer period. This suggests that ECB rates will not start to rise until well into 2019 and even that would depend on a significant euro-zone recovery being sustained. So ECB base rates are going to stay at zero per cent for some time yet.

This is good news for borrowers and for the Government in terms of its own borrowings, though the gradual winding-down of the ECB buying programme does raise questions about the cost of raising borrowings for the NTMA in the years ahead. The exchequer has been a beneficiary of the quantitative easing programme, allowing us to raise new cash more cheaply, and this bonus is now going to start to slowly peter out.

Government bond markets may start to react to this next year, pushing up the cost of borrowing. For savers the current pain of almost no return on regular savings accounts looks set to continue.

For mortgage and other borrowers, interest rate changes over the next year will thus be driven by competition rather than ECB changes, though if long-term interest rates start to anticipate an ECB rate change next year, we could see this reflected in fixed interest rate offers. With standard variable mortgage rates here well above the euro norm, competition could even see these edging lower.

However, those taking out longer-term loans such as mortgages need to realise, too, that the interest rate cycle will start to head upwards, sooner or later. Economists are debating the timing and how high rates will go in the next cycle, but one thing for sure is that a zero per cent interest rate is not the norm. The era of super low interest rates is not over yet, but today’s ECB move is another step along the road back to normality and higher borrowing costs.

1 State’s biggest landlord records 30% rise in rental income
2 Irish tourism must also help itself to survive the pandemic
3 What will the office market look like after the great remote working experiment?
4 Facebook agrees Irish wind farm deal with Brookfield
5 ‘Saudi Arabia is where the opportunities will happen in future’
6 Trump signs executive orders banning TikTok and WeChat
7 Project Eagle: What was it and why is it in the news?
8 Marlet secures €65m from AIB for Dublin docklands build-to-rent scheme
9 Two men face fraud charges over £1.2bn sale of Nama’s NI loans
10 More than 1,200 tracker mortgage complaints still awaiting ombudsman ruling
Real news has value SUBSCRIBE