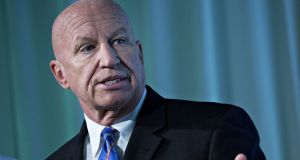 Millions of US citizens working overseas could see their tax bills lowered by an overhaul of the tax system as Republicans eye the elimination of a requirement for American expatriates to pay taxes both overseas and in the US.

Kevin Brady, Republican head of the House ways and means committee, which is drafting a tax reform bill, said lawmakers were considering the measure, which has been the focus of lobbying by Republicans Overseas, a group of party donors around the world.

“It is under consideration. They have made the case,” Mr Brady told the Financial Times at a Christian Science Monitor event.

Some 8.7 million Americans live outside the US, excluding military personnel, according to the Association of Americans Resident Overseas.

For those expatriates, the first portion of their foreign earnings – about $100,000 in 2016 – is already shielded from US tax liabilities, but they have to pay tax on any income above that level to both the host authority and the US.

Republicans are striving to pass the first major overhaul of the US tax code since Ronald Reagan in 1986. They are looking at measures that would simplify the code, lower the corporate tax rate, make it less attractive for US companies to keep cash overseas and changes that they say will help the middle class.

Mr Brady later told the FT that lawmakers were taking “seriously” the call for a shift from a citizen-based income tax system to a residence-based system that would tax people only on the income they earn in the US.

Republicans have already decided they want to make an equivalent change for business, switching to a “territorial” regime where most of US companies’ foreign earnings are beyond the reach of American tax collectors.

The US Chamber of Commerce, a business lobby group, has urged policymakers to consider US-only taxation for individuals too, arguing that taxing foreign income hurts American managers at the overseas affiliates of US exporters.

In a recent interview with the FT, Mick Mulvaney, the White House budget office director, said he supported the shift to residence-based taxation. “It is good for American businesses to encourage Americans to work overseas,” he said.